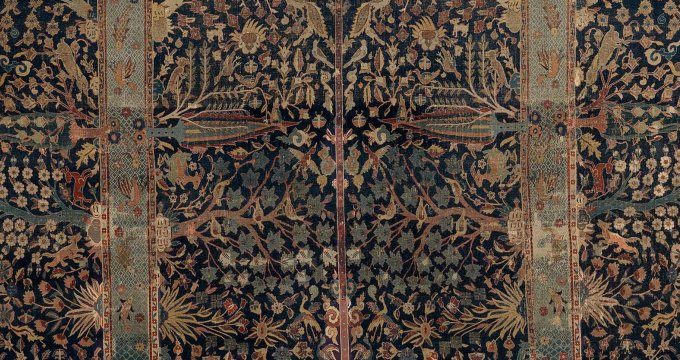 Financial Tribune – The Wagner Garden Carpet – a late 17th-century Persian carpet never before seen in the US – is on display at the Metropolitan Museum of Art in New York in a special exhibition titled “Eternal Springtime: A Persian Garden Carpet from the Burrell Collection”.

Called the “Wagner Garden Carpet” after a former owner and woven during the Safavid dynasty in Kerman, it is the third-oldest-known Persian garden carpet from the seventeenth century.

The Wagner Garden Carpet is presented at the Metropolitan along with eight other historical carpets from the museum’s collection all made in Iran.

Exquisite carpets are on display at the Sharmin and Bijan Mossavar-Rahmani Gallery (Gallery 462), which features masterpieces created during the Safavid dynasty in the 16th and 17th centuries, the museum’s website, Metmuseum.org wrote.

Through their prodigious designs, garden carpets evoke images of the ancient Iranian Chahar Bagh – the four-quartered garden with water channels that divide the walled garden and meet at a central pool.

In the Wagner carpet, the garden – which depicts springtime – also teems with life. The trees, bushes and shrubs are abloom; animals (both predators and prey), birds of all types, multicolored butterflies and moths inhabit the landscape. Fishes and ducks populate the water. The shimmering water is cunningly illustrated by a lattice pattern drawn with varied thicknesses of line and color.

Wagner carpet measures 531cm by 432cm and is woven with cotton warps; wool, cotton, and silk wefts; and wool pile. Kerman was a famous hand-made carpet center during the Safavid period and is still a major city where quality carpets and rugs are made.

The carpets are set to remain on show through October 7 at the Metropolitan Museum.

July 18, 2018
Is Helsinki Trump’s Iran Deal?
Will Russians walk out on Iran in Syria?