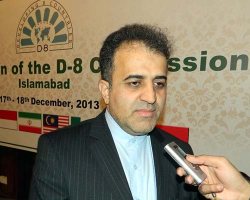 Tasnim – A high-ranking Iranian Foreign Ministry official, in a United Nations General Assembly meeting, voiced the country’s concerns over the issue of dust pollution and said resolving the problem hinges on regional and international cooperation.

He further emphasized that Iran’s problem of fine particles (known as PM2.5) is an issue originating from outside of its borders, adding that a major part of the particles enter Iran from neighboring countries.

The Iranian diplomat went on to say that dealing with the problem requires regional and global cooperation, and accordingly, Iran is ready to cooperate with other countries, especially in the West Asia region.

During the meeting, President of the 72nd Session of the UN General Assembly Miroslav Lajcak praised Iran’s role in promoting “this important dialogue on sand and dust storms”.

“This can be a technical topic but it is one that affects people all over the world, from Africa to the Middle East and beyond,” he said.

“It is clear, then, that the storms also affect our economies. One sand or dust storm can cost hundreds of millions of dollars. The losses are really felt in the agriculture, transportation and infrastructure sectors. These are resources that could have been channeled towards sustainable development at a time when we need to mobilize more for the 2030 Agenda,” Lajcak stated.

Iranian residents in the western and southwestern provinces that border Iraq face a growing trend in the influx of fine particles, which are generated by drought-hit marshlands in neighboring countries.

The disruptive dust storms have pushed pollution in those border areas to alarming levels in recent years, raising health concerns.