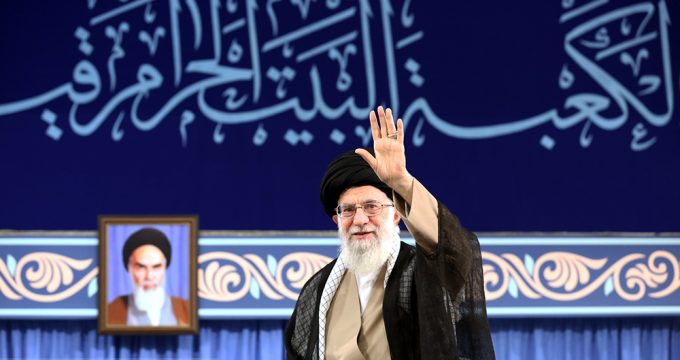 Khamenei.ir – As the time for Abrahamic rituals of Hajj approaches— the time when people leave for Mecca to perform Hajj— organizers and officials of Iran’s Hajj organization met with the Leader of the Revolution, Ayatollah Khamenei, this morning (Monday) July 16, 2018.

At this meeting, the Leader of the Revolution stressed: “Hajj represents a field of action that shows that religion and politics cannot be separated, nor can this world and the hereafter, nor can spirituality and materialism.”
Ayatollah Khamenei tapped on the various rituals of Hajj and added: In Hajj there is supplication to God, there are dua, tawassul (seeking intercession from the ahlulbait), crying, as well as tawaf (go around the Kaaba), sa’i (walking back and forth seven times between the two small hills of Safa and Marwah, located adjacent to the Kaaba in Masjid al-Haram), prayers, there is also the concept of gathering of the people; this is extremely important. Those who regard politics separate from Islam, haven’t truly understood Islam.

Ayatollah Khamenei reminded his audience: “No one should manipulate and prevent the concepts of Hajj, or the points and rituals that exist in Hajj. Th individuals and the government that prevent these concepts are, indeed, “creating an obstacle in the way of God” [Quran: 2:217]. The Ka’ba belongs to all the Muslims. According to the Quran, Holy Mecca belongs to all Muslims and all Muslims have the same right over Mecca and Medina. No one should think they can do whatever they want on this land.

He went on to say: “Unfortunately, the government of Saudi Arabia creates problems for the Hajj pilgrims and prevents some rituals to be performed; even though, it is righteous to allow them perform those rituals. These issues must be regarded as the Muslims’ demands, which should not be forgotten.

Ayatollah Khamenei pointed to the fact that the 2015 Hajj tragedy in Mina will never be forgotten and must be followed by the truth-investigation team— whose members included de the main claimant, that is the Islamic Republic— so that justice is applied, adding: “An enormous incident of atrocity took place there. Security is an inalienable right of the pilgrims; this is the main demand on the part of the Hajj pilgrims. “Secure” is one of the features attributed to this place by God; however, this safety is breached. Continue to pursue this matter tirelessly. The groups who are present in Mecca, the Hajj organization, Ministry of Foreign Affairs, and the Judicial Branch must follow up on the issue.”

The Leader of the Revolution further stated: It has been reported that the families of the martyrs of Mina tragedy—who were buried in Mecca— have not been allowed to visit the graves of their martyrs. Diya (atonement) of the martyred must also be demanded.”

Indicating that the Muslim world needs unity today, Ayatollah Khamenei mentioned: “Division is forbidden; as the enemy has been focusing on the Muslim world. After the victory of the revolution, the Iranian nation recognized a new meaning in Hajj and new concepts were revealed to the Iranian nation: Hajj along with contentment, Hajj along with mutual understanding among all Muslims, Hajj as a manifestation of ‘stern to the disbelievers yet kind among themselves’ [Quran; 48:29].

Ayatollah Khamenei then described the untrue form of performing hajj as, “At the opposite to this hajj, is the hajj wherein some sow discord between brothers, distancing themselves from them, while allying with the Front of Arrogance. This hajj is the opposite of what God has wanted.”

Referring to the efforts of the U.S. with regard to the matter of Palestine, the Leader of the Revolution stressed: “Pressure on Yemen on the one hand, the issue of Palestine and that Satanic and vicious policy, they name it ‘the deal of the century,’ on the other hand;— they must know that this policy can never be realized.”

His Eminence highlighted the significance of the Palestinian cause and said: “To the dismay of the U.S. rulers, the cause of Palestine will never be forgotten, and the city of Quds [Jerusalem] will always remain the capital of Palestine; and the first qibla (to direction of which prayers are performed) of Muslims will remain for Muslims.

Ayatollah Khamenei clarified that Quds will always remain at the hands of Palestinians and said: The turbulent dream that the city of Quds must be in the hands of the Zionists, will never come true and the Palestinian nation will stand up to it, with other Muslims backing them.”

Ayatollah Khamenei slammed Muslim countries who refuse to support Palestine and added: “Well, unfortunately, some Muslim states, due to their lack of belief in the essence of Islam—and let alone the Palestinian cause— have turned into scapegoats for the U.S. and sacrifice themselves for the sake of the US. This is not helpful and they will gain no benefits; by God’s grace, the Palestinian nation will gain victory over the enemies, and they will witness the day when the Zionist regime is obliterated.”