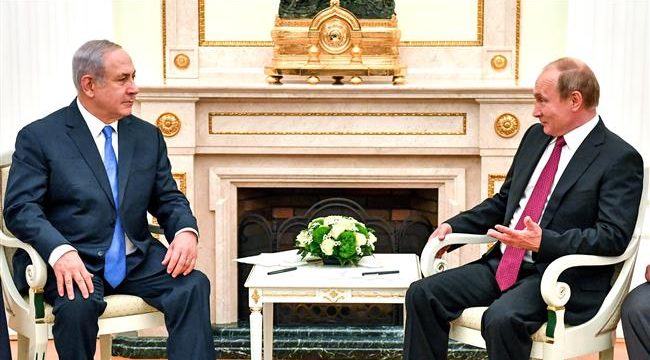 Press TV – Russia has reportedly rejected an Israeli demand to keep Iranian military advisors away from the occupied Golan Heights.

Israel’s Ynetnews website reported on Friday that Moscow had so far turned down the Israeli request to remove Iranian advisors to within 80 kilometers from Golan.

The Israeli premier said Tel Aviv “won’t take action against” the government of Syrian President Bashar al-Assad and urged Moscow to “get the Iranians out,” Reuters quoted Netanyahu as telling Putin in the meeting.

Separately, Israeli minister of military affairs threatened to act against what he called “Iranian entrenchment in Syria”.

“Regarding a retreat to 40 kilometers or 80 kilometers, it doesn’t matter…the moment we see Iranian presence, we take action, and that is how it will continue,” Avigdor Liberman said.

However, Ali Akbar Velayati, a senior adviser to Leader of Iran’s Islamic Revolution Ayatollah Seyyed Ali Khamenei, stressed that Iran would not leave Syria in the face of US threats.

“We will only leave this country when Syrian officials tell Iran that they no longer need our military advice,” he said in an address to the Valdai Discussion Club in Moscow.

Over the past few weeks, Syrian forces have been making sweeping gains against foreign-backed Takfiri terrorists in Syria’s southern Dara’a Province which lies adjacent to the Golan Heights.

Dara’a’s return to the Syrian government control would cut the much-reported collaboration between anti-Damascus militants and Israel which has beefed up its military presence in Golan in recent days.

Andrei Kortunov, the head of the Russian International Affairs Council, was recently quoted as saying that even if Putin agreed to remove Iranian advisors from Syria, Iran also needed to sign up to this, as well.

“You can move the Iranian forces by 50 or 80 or even 100 kilometers away from the Golan Heights, but if the infrastructure remains there and if this territory is still controlled by Damascus, then it won’t be difficult to bring the Iranian forces back,” he added.

Meanwhile, the media have quoted a Russian presidential aide as saying that Syria would dominate the July 16 talks between Putin and his American counterpart, Donald Trump, in the Finnish capital, Helsinki.

“There are very many [issues] in the context of Syria, and if we mention regional conflicts, as I personally see it, Syria will be a focus of the talks between Putin and Trump,” Yuri Ushakov was quoted as saying on Friday.

He further noted that other topics would also be on the agenda of the meeting, namely North Korea and the Iran nuclear deal and the crisis in eastern Ukraine.

Russia’s Foreign Minister Sergei Lavrov said on July 4 that Iran was one of the key players in the region, and that it would be “absolutely unrealistic” to expect it to abandon its interests in Syria.

Nevertheless, Kremlin spokesman Dmitry Peskov has rejected reports that Iran’s role in Syria would be raised at the Helsinki summit.

“At any rate, the Russian side is getting ready, and Putin is prepared to discuss the topic of Syria,” he said, rejecting reports which suggest Trump and Putin would discuss a third country i.e. Iran.

In an article published in the Middle East Eye news portal on Friday, political analyst Shahir Shahidsaless said, “Lavrov is right that pushing Iran out of Syria is unrealistic. As Iran has emerged as a decisive political power in Lebanon and Iraq, it will also likely remain a major player in Syria, even after the armed conflict is over.”

“On the US side, what can Trump offer Putin in exchange for abandoning Iran with which Russia has significant strategic commonalities? While the establishment and the deep state in the US have a hostile position towards Putin,” Shahidsaless added.