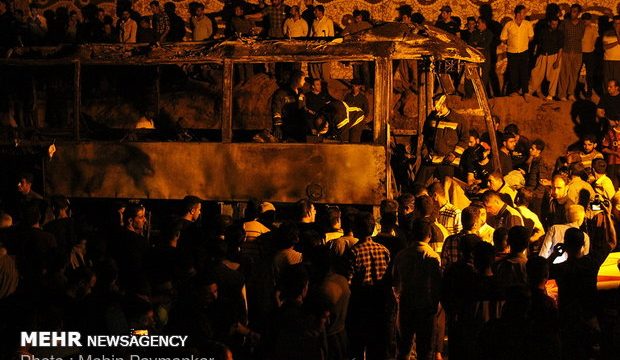 MNA – At least 27 people have been killed in the city of Sanandaj, Kurdistan province, after a fuel tanker rammed into a passenger bus and burst into flames.

At least 27 people have been killed in the city of Sanandaj after an oil tanker collided with a passenger bus; a number of people are also reported to have been severely injured during the collision.

According to Kurdistan Road Police, the tragic incident took place in the early hours before dawn on Wednesday in an inter-city highway.

One of the two bus drivers who survived the incident said that the bus had stopped to pick up passengers behind a pickup truck, where suddenly an oil tanker rammed into the bus and both burst into flames.

According to reports, an oil tanker exporting south-Kurdistani oil to East-Kurdistan was involved in the crash.