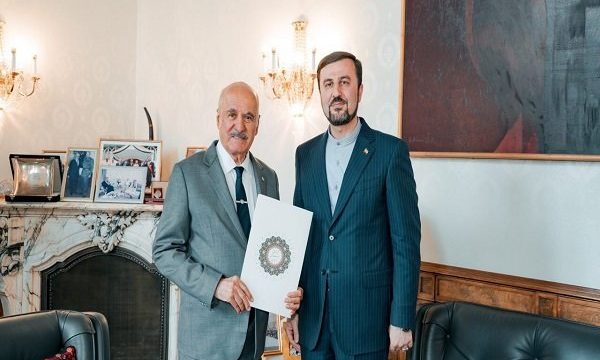 MNA – Newly-appointed Iranian envoy to Vienna-based international organizations met and held talks with Director-General of the OPEC Fund for International Development (OFID) in the Austrian capital on Monday.

Kazem Gharibabadi, the new Ambassador and Permanent Representative of the Islamic Republic of Iran to the UN Office at Vienna (UNOV) and other international organizations based in Vienna, met and held talks with Suleiman Jasir Al-Herbish, Director-General of the OPEC Fund for International Development (OFID), in the Austrian capital on Monday.

While presenting his credentials as the new Iranian envoy, Gharibabadi stressed Iran’s role as one of the main founders of OFID, voicing the country’s constant support for OFID’s fundamental role in eradication of poverty and promotion of sustainable development in underdeveloped countries.

The Iranian envoy also expressed support for OFID’s goals and missions in other international organizations, highlighting the capacities of Iranian companies for contributing to the implementation of various OFID projects in target countries.

The OFID chief, for his part, hailed Iran’s contribution to the organization and welcomed the country’s initiatives and constructive feedbacks aimed at promotion of OFID’s objectives. He further deemed Iran a key member state of OFID.

The OPEC Fund for International Development (OFID) is the intergovernmental development finance institution established in 1976 by the OPEC Member States, with an objective to provide financial support to Member States and other developing countries. Suleiman Jasir Al-Herbish of Saudi Arabia is currently in his third term of office at OFID.