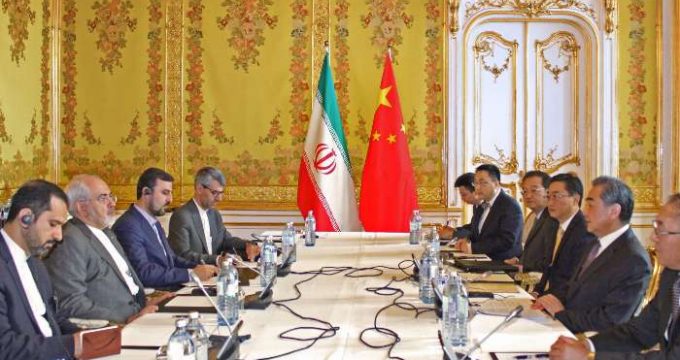 IISS: US exit from JCPOA nudged Europe towards East

IRNA – The International Institute for Strategic Studies says US withdrawal from the JCPOA and the ensuing disruption in Europe’s trade with Iran has nudged the EU toward collaboration with China and Russia on Iranian issues.

The EU finds itself in a dilemma, facing pressure from Washington to disengage with Iran and pressure from Tehran to provide the above guarantees or see an Iranian withdrawal. Europe has continued to pursue creative strategies to counter US sanctions, Mahsa Rouhi, a research fellow at the IISS said an article titled ‘Can China save the Iran nuclear deal?’

She said ‘In the aftermath of Washington’s withdrawal from the Iran nuclear accord, hopes for saving the deal have typically been pinned on Europe and on Iran itself. However, Europe’s economic and security dependency on the United States means the continent is finding it hard to keep the Joint Comprehensive Plan of Action (JCPOA) on life support. Can China play this role instead?’

The following is the full text of the article:

Europe is trying to save the Iran nuclear deal, but finds itself trapped by the conflicting demands of Washington and Tehran. China’s independence and economic power may allow it to step in – but trade will remain Beijing’s focus.

In the aftermath of Washington’s withdrawal from the Iran nuclear accord, hopes for saving the deal have typically been pinned on Europe and on Iran itself. However, Europe’s economic and security dependency on the United States means the continent is finding it hard to keep the Joint Comprehensive Plan of Action (JCPOA) on life support. Can China play this role instead?

For Iran, the most eagerly anticipated outcome of the JCPOA was economic reintegration with the international community and the ensuing benefits to the country’s economy. Since the US withdrawal, Iranian officials have emphasized that Iran will continue to comply with the deal only if the EU and other remaining parties can ensure economic rewards.

In particular, Iran wants the ability to sell oil, access to the international financial system and access to shipping and insurance to enable trade. The ultimate goal is to keep the country’s economy from returning to recession. In the short term, as long as economic growth is positive, Iran’s leaders may be able to resist calls from hardliners to ignore the terms of the JCPOA or, more drastically, pull out of the Nuclear Non-Proliferation Treaty.

The EU finds itself in a dilemma, facing pressure from Washington to disengage with Iran and pressure from Tehran to provide the above guarantees or see an Iranian withdrawal. Europe has continued to pursue creative strategies to counter US sanctions.

More recently, the European Investment Bank announced that the EIB was ‘not the right tool’ to save the nuclear deal. Another proposed solution is to create a new bank, or remodel an existing one, for the exclusive purpose of facilitating trade with Iran. Such an institution, if it had no financial links to the US banking system, could not be harmed by US sanctions. The proposal has been aired within Germany. It is not clear, however, that any ‘workaround solution’ could be successfully implemented and provide enough economic benefit to keep Iran in the deal.

Given the EU’s difficulty in this arena, could China emerge as a savior of the JCPOA? China is Iran’s largest trading partner. Beijing’s centralized system and lack of US security ties potentially makes it less susceptible to US pressure.

The economic ties between Iran and China are strengthening significantly; in 2005, bilateral trade between Iran and China was approximately $8.5 billion – today that figure is $31.6bn, nearly a quadruple increase between 2005 and 2017. From 2016 to 2017 alone, trade between China and Iran grew by about 19%. This occurred despite uncertainty over US sanctions, and while many European firms were wavering in the face of those sanctions. China has insisted that it will maintain economic ties with Iran despite US pressure. On 9 May, a Chinese foreign ministry spokesperson announced that Chinese companies were more ‘isolated from the US market – and possible sanctions,’ and therefore less susceptible to US influence.

China could work around sanctions

However, such statements – and the extent to which China could take the lead in saving the deal – should be viewed with skepticism. The US is China’s largest trading partner, with annual trade valued at nearly $650 billion. If a choice were to be made, it is unlikely that China, or Chinese companies, would risk this trade to save the nuclear deal.

Moreover, as discussed at a recent IISS workshop in Beijing, China sees its interests in the Middle East as almost exclusively economic, rather than political or strategic. Its calculus regarding the nuclear deal should therefore be viewed through this lens. The second largest Chinese purchaser of Iranian crude, Unipec (the trading arm of state-owned Sinopec) also imports oil from the US, and is seeking to expand in the American market, having tripled the barrels per day traded since 2017.

If China is able to negotiate high-profit deals with Iran, however, then there are many ways in which Beijing could work around US sanctions to avoid risking US trade. For instance, China could use other, smaller, oil businesses with limited or no ties to the US to carry out trade with Iran.

China can also price oil in Yuan rather than in US dollars. Yuan-based oil (petro-yuan) would chip away at the dominance of the US dollar and allow sanctioned Iranian oil to continue to be traded without interruption by China and other major importers. Cryptocurrencies are another potential means of moving away from the US dollar in order to effectively avoid US sanctions.

US sanctions on oil imports from Iran must also be seen in the context of China’s escalating trade war with the US. On 15 June, Beijing announced retaliatory tariffs, including a 25% tax on American oil beginning in September. Having traded up to 300,000 barrels per day with the US, China will likely turn toward other markets, including Iran, to replace any reduction in oil trade caused by the tariffs. Nobody believes Beijing will abide by Washington’s demand, issued on 26 June, that all purchases of Iranian oil cease by November.

Geostrategically, US withdrawal from the JCPOA and the ensuing disruption in Europe’s trade with Iran has nudged the EU toward collaboration with China and Russia on Iranian issues. This turn to the East results in less leverage for Western powers in any future negotiations with Iran over its nuclear program and regional policies.

Given that Iran did not violate the deal, America’s withdrawal from the JCPOA also makes it less likely that China would join multilateral sanctions on Iran in the future. China has a much higher tolerance for Iranian policies in general, and is far less likely than the EU to exert pressure on Iran over regional activities, human rights and missile development. Thus while China might increase its potential economic leverage on Iran, there is little reason to believe it would use that power. Iran would be left with a freer hand in the Middle East – contrary to President Trump’s claim that US withdrawal from the JCPOA has had a moderating effect.

Mahsa Rouhi is a Research Fellow at the International Institute for Strategic Studies’s Non-proliferation and Nuclear Policy program. She is also an associate of the Project on Managing the Atom and International Security Program at Kennedy School’s Belfer Center for Science and International Affairs.