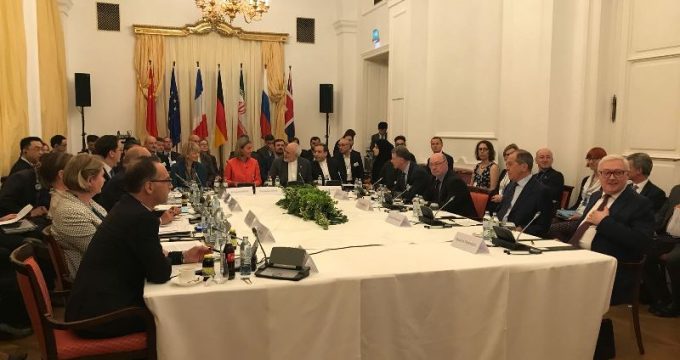 Will Europe finally act independently of US?

MNA – The 4+1 summit was launched in Vienna Friday to try to repair the damage done when the US reneged on the Joint Comprehensive Plan of Action, JCPOA.

The meeting, led by Federica Mogherini, EU High Representative for Foreign Affairs and Security Policy, was attended by Iran’s Foreign Minister Mohammad Javad Zarif, along with the foreign ministers of the UK, Russia, China, and Germany.

The meeting was aimed at saving the Iran deal and permitting continuous cooperation between the Islamic Republic of Iran and remaining members of the Iran deal without the US.

At the end of the meeting, an EU package was to be offered to Iran.

In a 10-article statement released by Mogherini, Europe was accountable for maintaining the commitment to the JCPOA. However, there are valid concerns.

Firstly, the agreement, particularly article eight, does not guarantee that Europe will stick to the pact based on the intentional law.

Secondly, in the past two months following the US withdrawal from the JCPOA, members of 4+1 have repeatedly failed to keep companies, commercial businesses and financial institutions in business with Iran.

Thirdly, leaders of European member states of the JCPOA have over and over again expressed concerns over Iran’s regional role and defensive missile capabilities. For that reason, they even wanted Iran to sign the FATF international convention, while they had no obligation to remain faithful to the Iran accord.

The frustration expressed by Iran’s foreign minister over Europe’s proposal in the past 72 hours is a proof that Europe, perhaps out of fear, is not ready to stand up fully against the US demands and confront Washington.

The Islamic Republic has refused to accept these rather weak proposals without legal and other guarantees, and is not willing to sacrifice its national interests over the European leaders’ uncertainty and lack of firm resolve. Unless Europe makes hard decisions to try to cancel the effects of the US failure to abide by the JCPOA, and sanctions ahead, albeit without the influence of the Saudis and Zionists, the negotiations may come to naught.