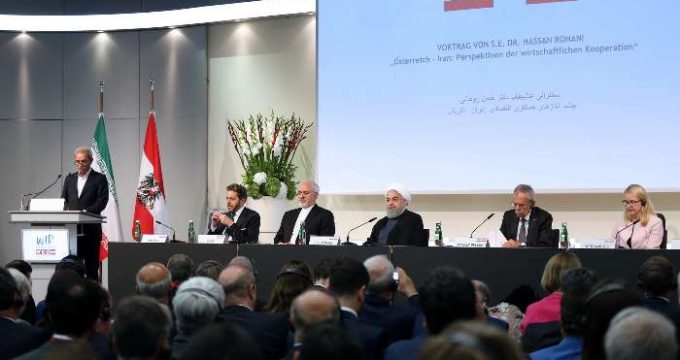 “…the purpose of the trip for the Iranian delegation was to re-assert Iran’s sovereignty and independence on the world stage, as well as to further displayed Iran’s diplomatic maturity against the illegal, irrational unilateral withdrawal of the United States from the JCPOA,” Pye Ian told the Tasnim news agency.

Pye Ian is an independent economic and geopolitical researcher as well as a strategic planning and business development advisor. His articles and analyses on international affairs, economic trends and cultural topics have been published in various mainstream and alternative press sources. Ian’s wider intellectual interests are reflected in his writings on the convergence of foreign affairs, political philosophy, history, global finance and energy policy. He has undergraduate degrees in economics and political science from the University of California and a Master’s degree in finance from Cambridge University.

Tasnim: As you know, Iranian President Hassan Rouhani, along with FM Zarif, traveled to Austria and Switzerland to strengthen ties with Europe after Washington’s pullout from the JCPOA. What is your take on this trip?

Ian: Aside from the obvious acute goal of trying to salvage the three-year-old JCPOA agreement, which has proven to be very successful in achieving its nonproliferation aims for the wider M.E.N.A., the purpose of the trip for the Iranian delegation was to re-assert Iran’s sovereignty and independence on the world stage, as well as to further displayed Iran’s diplomatic maturity against the illegal, irrational unilateral withdrawal of the United States from the JCPOA. I.E. Iran held fastidiously to the spirit and letter of the JCPOA since its beginning, whereas the US, out of demonstrable bad faith, left it, despite the remainder of the P5 members of the JCPOA remaining in the accord. The Europe trip was thus partly meant by Iran to remind the world of who have remained ‘adults in the room’, versus who have fallen short of such an expected civil standard, and belligerently so.

Iran naturally wishes to show itself as on the same level of political maturity as said other non-US parties to the JCPOA, all of whom Iran continues to enjoy positive relations with. Related, Iran wishes to preserve past and future potential economic commitments from said non-US European and Eurasian nations, especially considering that unilateral sanctions applied by Washington against Iran remain extra-judicial with regard to international laws and mores.

Lastly, I believe that the trip was meant to send further signals to Iran’s closest geopolitical and economic allies out of the P5+1 members – namely, China and Russia – that Iran remains a fair, ‘above-board’ actor on the world stage despite said Washington’s latest actions. Such diplomatic moves will thus further integrate and expedite both strategic and economic mandates which the three nations have shared for some time now, whether in the security, energy, continental infrastructure or evolving bilateral and multilateral currency usage arenas.

Tasnim: Since Washington’s pullout from the nuclear agreement, the European Union has been making all-out effort to preserve the deal. The EU was expected to deliver a package of proposals to Iran to save the deal. What’s your perspective on the package?

Ian: Knowing that Washington carries over-weight influences both politically and economically with all European nations, Iran might be expecting the ‘JCPOA preservation package’ to mirror certain sentiments and aims of the Americans, especially considering that the Europeans fear Washington’s further unilateral punishments, which at this point and pace do not require any viable, sober reasons to be implemented against ANY nation. I sense that Iran will nonetheless aim to meet the proposals put forward in said packet as much as possible, again not only to exhibit further exemplary good faith and transparency with regard to its acute and overall motives and actions, but also to further influence European actors to consider distancing themselves more from said unilateral bullying by Washington.

I.E. By ‘playing ball’ with this imminent package as much as possible, just as it had cooperated fully with the parameters of the original JCPOA agreement itself, Iran seeks to show that – ironic to the goals of sanctions aimed against Iran – abiding completely by Washington’s diktat on any and all matters involving Iran … is actually bad for business, bad for growth, and bad for economic and geopolitical sustainability for all P5+1 member states, the EU, and certainly other nations on earth. Subtle, discrete, amiable ‘soft power’ is here being displayed shrewdly by Iran while Washington & Tel Aviv continue to alienate themselves further on the world stage vis-a-vis all things involving Iran on the one hand, and regarding lending credibility to any and all international treaties, agreements, pacts and ventures on the other hand.

Tasnim: On Monday, a senior US State Department official reaffirmed the Trump administration’s goal of reducing Iran’s oil exports to zero by November. The Iranian president says it is not possible to end Iran’s oil export. Do you believe so?

Ian: Yes, because successfully quelling Iran’s oil exports – and subsequently, the consumption habits of nations worldwide toward Iranian oil and natural gas resources – is implausible considering the lack of credible spare capacity elsewhere for making up the presumed lost oil supplies resulting from Washington’s latest oil sanctions placed on Iran. The Saudis have never had to test their spare capacity to the extent necessary if the over 2.4 million barrels per day of Iranian crude currently servicing global oil markets … are suddenly cut off. Case in point, the world witnessed $146/barrel oil a decade ago, and yet Riyadh sat on its hands with regard to exercising its spare capacity in oil production, exporting and reserve usage.

Plus, never mind that oil embargoes and their related ilk have traditionally served as outright acts of war (I.E. The Japanese attacked Pearl Harbor in December 1941 in part due to the US embargoing Tokyo’s oil supplies. Yet although said history is meant to serve as a ‘precedent to incitement’, Iran will not ‘take the bait’ and act belligerently on the world stage due to these oil sanctions), the world simply cannot afford the resulting commodity price trajectories of WTI and Brent Crude spiking to north of $100 and $115, respectively, due to further supply constraints resulting from bluffed spare capacity and production make-up promises on the parts of the Saudis, Americans, and other key energy producers. Despite claims to the contrary by Washington, America’s consumer economy is hurting, with true unemployment being an easily much higher multiple of what the Bureau of Labor Statistics claims that it is, and inflation much higher than what the Consumer Price Index & related metrics pronounce. Subsequent GDP growth rates are lower than advertised, as are household & even corporate savings, with no wage growth among those who *are* employed full time.

Thus, jacking up oil prices will hit consumers’ pocketbooks hard & immediately, despite the largest transatlantic bulge-bracket banks, which recycle petrodollars earned through oil receipts, benefiting greatly from oil price spikes, alongside speculators’ activities, which are symbiotic with said banks’ activities. Naturally, the prices of oil and natural gas are not determined purely by classic economic supply & demand, but by political mandates from such powerful banks & their ultimate very private owners.

Too, higher oil prices going into another worldwide recession a la that of 2007 – 2009 will only further motivate China, which is the world’s largest oil consumer, to expedite already existing efforts for its alternative to the staid 45-year-old petrodollar standard, which was spearheaded by the US and Saudis 45 years ago and in large part ALLOWS for said politicized energy price adjustments either up (2008) or certainly down (1976, 1985, 2014) to secure foreign policy aims for Washington. The Russians, Iranians, Venezuelans, Nigerians, Qataris, Turks, ‘Stan states and other energy producers or key importers will welcome and assist said efforts, whether on behalf of the “petro-yuan” or another Eastern/Southern energy currency standard divorced from Dollar Hegemony.

Tansim: There are some allegations about the involvement of an Iranian diplomat in the suspected bomb attack on an MKO meeting in Paris. Iranian officials believe that the Mujahedin Khalq Organization (MKO) is behind the “baseless and unfounded” plot against the diplomat designed at the current sensitive and important juncture to damage Iran-Europe relations. What do you think?

Ian: Considering that the traditional and ongoing terrorist make-up of the MKO/MEK has always involved deception and violence against those they deem as their enemies, and considering that the same characteristics underwrite how neoCONservatives (or “neoCONs”) – who overtly support the MEK politically, legally, financially and strategically on multiple continents – think and act internationally and within host nations they infest, it would not shock the discerning mind that there might be hastily designed “false flag” characteristics involved in this latest, bizarre scenario involving this breakaway, traitorous, terrorist cult. In other words, said suspected bomb attack could very well have been staged in order to blame Iranians loyal to Iran, rather than to said MEK/MKO cult.

The MEK/MKO are clearly a lever for anti-Iranian forces who all ultimately seek what they call “regime change” in Tehran. Because said neoCONs have propped up and funded the MEK’s leadership in Europe, naturally they all saw the recent diplomatic trips taken by President Rouhani and Minister Zarif to Switzerland and Austria as seemingly perfect opportunities and settings for further framing Iran in the eyes of global opinion. However, Tehran has no need, let alone any medium to long-term track record, for committing such acts of terror against anyone or thing, in Paris or elsewhere. Hence, and as always with said false flag attacks, one must ask with all sobriety – “Cui Bono?” (Def.: who stands, or stood, to gain from a crime, and so might have been responsible for it)?