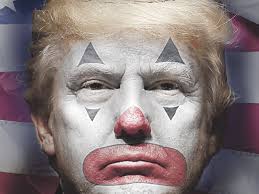 The Hill– One of President Trump’s hometown papers mocked him on Independence Day by depicting him as a clown.

“The clown who plays king can’t overthrow the bedrock values this nation was founded on 242 years ago today,” the headline reads.

An early look at Wednesday’s front…

The New York Daily News has been highly critical of Trump throughout his presidency and often uses their front page to mock the president over scandals.

Just last week, the paper proclaimed “We are f—–” following the announcement that Supreme Court Justice Anthony Kennedy would retire.

Trump finds himself in the midst of several scandals this July 4, including his administration’s handling of immigrant families at the border, continued reported ethics violations by Environmental Protection Agency Administrator Scott Pruitt and intensifying tariff battles with key U.S. allies.