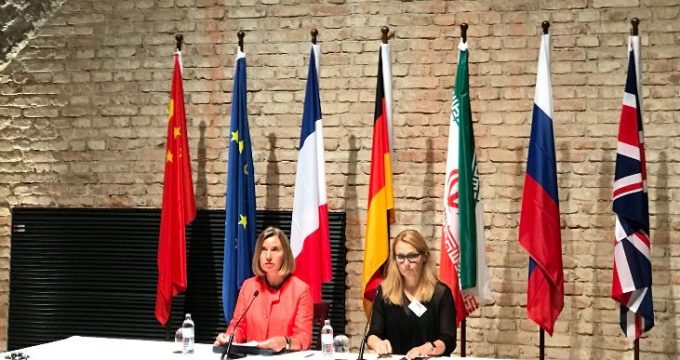 Tasnim – A Friday meeting among senior diplomats from Iran, Russia, China, Britain, France, Germany and the European Union, held in Vienna to discuss the ways to save the Iran nuclear deal, came to an end with a statement from the JCPOA joint commission.

The high-profile meeting in the Austrian capital involved delegations from the remaining parties to the Joint Comprehensive Plan of Action and a team from the European Union, led by EU Foreign Policy Chief Federica Mogherini, who read out a communique after conclusion of the talks.

The Iranian delegation was chaired by Foreign Minister Mohammad Javad Zarif and involved three deputies for the legal and political affairs.

The official statement after the Friday’s meeting, released by the EU External Action Service, is as follows:

1.​ Upon the request of the Islamic Republic of Iran, a meeting of the Joint Commission of the Joint Comprehensive Plan of Action (JCPOA) was held on 6 July in Vienna at ministerial level. The Joint Commission met to discuss the way forward to ensure the continued implementation of the nuclear deal in all its aspects and review unresolved issues arising from the unilateral withdrawal of the United States from the agreement and the announced re-imposition of sanctions lifted under the JCPOA and its Annex II, which they deeply regret.

2.​ The Joint Commission is responsible for overseeing the implementation of the JCPOA.

4. ​The participants in the JCPOA reconfirmed their commitment to the full and effective implementation of the nuclear deal. They recalled that the JCPOA is a key element of the global non-proliferation architecture and a significant achievement of multilateral diplomacy endorsed unanimously by the UN Security Council through Resolution 2231. The participants welcomed the 11th report by the International Atomic Energy Agency of 24 May confirming that Iran is abiding by its nuclear-related commitments.

5.​ All participants reiterated the need to continue the full and effective implementation of all nuclear related commitments. They welcomed steady progress made on the modernization of the Arak research reactor and took note with satisfaction that the United Kingdom will take over the function of co-chair of the Arak Working Group. Participants will continue to support the modernization of the Arak research reactor as part of the JCPOA and the conversion of the Fordow facility in a nuclear, physics and technology center. Participants also welcomed the significant projects in the area of civil nuclear co-operation carried out on the basis of Annex III of the JCPOA.

6. ​The participants recognized that, in return for the implementation by Iran of its nuclear-related commitments, the lifting of sanctions, including the economic dividends arising from it, constitutes an essential part of the JCPOA. They also noted that economic operators pursuing legitimate business with Iran have been acting in good faith based on the commitments contained in the JCPOA and endorsed at the highest level by the UN Security Council.

7. ​The participants discussed their recent efforts aimed at providing practical solutions in order to maintain the normalization of trade and economic relations with Iran. They welcomed the extensive work undertaken to-date, the intensification of technical dialogues and the mobilization of considerable resources by all.

8. ​The participants affirmed their commitment regarding the following objectives in good faith and in a constructive atmosphere:

– the maintenance and promotion of wider economic and sectoral relations with Iran;

– the preservation and maintenance of effective financial channels with Iran;

– the continuation of Iran’s export of oil and gas condensate, petroleum products and petrochemicals;

– the continuation of sea (including shipping and insurance), land, air and rail transportation relations;

– the promotion of export credit cover;

– clear and effective support for economic operators trading with Iran, particularly small and medium sized enterprises which are the backbone of many economies;

– the encouragement of further investments in Iran;

– the protection of economic operators for their investment and other commercial and financial activities in or in relation to Iran;

– the bringing together of private and public sector experts, including through the promotion of Business Councils;

– the practical support for trade with and investment in Iran;

– the protection of companies from the extraterritorial effects of US sanctions.

The participants noted that the EU is in the process of updating the EU “Blocking Statute” in order to protect EU Member States’ companies and of updating the European Investment Bank’s external lending mandate to cover Iran.

The participants will work on the above issues through direct bilateral efforts and through engagement with international partners in order to encourage them to follow the same policies and to establish similar mechanisms in their economic relations with Iran.

9. ​The participants recalled that these initiatives are aimed at preserving the nuclear deal which is in the security interest of all.

10. ​Participants agreed to keep progress under close review and to reconvene the Joint Commission, including at Ministerial level, as appropriate in order to advance common efforts. The participants stressed their determination to effectively develop and implement practical solutions concerning the above.