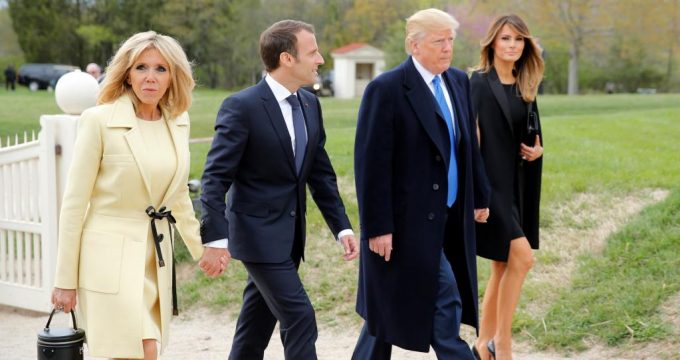 A contemplation on Trump’s destabilizing suggestion to Macron

Tehran Times | Hanif Ghaffari: The Washington Post, in one of its most recent articles, unveiled the U.S. President’s suggestion to the French government: Donald Trump is trying to Persuade Paris to leave the European Union.

The suggestion was apparently made during the recent visit of President Emmanuel Macron to Washington. During this visit, Trump has suggested that, if France leaves the European Union, the United States could have better bilateral trade relations with France.

The Washington Post then continued: “Other reports note that Trump recently told Group of Seven leaders that “NATO is as bad as NAFTA,” suggested to the Swedish prime minister that America should leave the NATO alliance , and launched gratuitous public attacks on German Chancellor Angela Merkel at her weakest moment. It’s a deepening trend that leads to an unavoidable conclusion: Trump doesn’t believe in the continued sanctity of the European Union and NATO, as well as the United States’ commitment to both.”

It should be noted that during the U.S. presidential competitions in 2016, Trump had expressed his opposition to the “existence of the United Europe”. Trump’s particular support for events such as Brexit, and beyond that, his support for nationalist and far-right extremists in European countries, indicated the full opposition of the President of the United States to the European Union and the Eurozone. Evidences suggest that Trump’s relations with nationalist groups and anti-EU movements throughout Europe remain strong. Therefore, the White House’s controversy with Europe is kind of fundamental opposition which is going to continue until the collapse of the United Europe or the end of Trump’s time at the White House.

The second point is that European officials’ compromise with Donald Trump and U.S. policies have not only had little effect on reducing the anti-EU inclinations of the U.S. President and his confrontation with the existence of the United Europe’s entity, but it made Trump even more hideous in this regard. The American President’s recent offer to Emmanuel Macron is also to be analyzed in the same vein. Under the influence of politicians such as Theresa May, the British prime minister, the French President Emmanuel Macron, and even German Chancellor Angela Merkel, Europe hasn’t yet used its capacities to confront the Trump government’s policies and actions.

It has reached a point where the British prime minister has asked other European countries to remain silent against the imposition of tariffs on the imported steel and aluminum from Europe and not take retaliatory measures against Washington’s policies! Theresa May asked the European leaders to step back from harsh reprisals against Donald Trump over his new tariffs. The British Prime Minister said that she would urge fellow leaders in the European Union to ensure a level-headed approach to prevent damage to free trade around the world.

Third, the negative role of European countries towards the Joint Comprehensive Plan of Action (JCPOA) is undeniable. The European troika first initiated its direct play on the United States’ ground, and agreed with its four demands to be included in the nuclear agreement. The U.S. demands went around the inclusion of Iran’s defensive and missile capabilities, the inspection of military sites, the removal of so-called Sunset clauses, and the limitation of Iran’s regional power. And the European authorities made a bad mistake in this regard. After the United States unilaterally pulled out of the nuclear deal, Europeans were still refusing to use their full capacity in opposition to Trump’s anti-JCPOA policies. It’s not without a reason that U.S. Secretary of State Mike Pompeo has reported the constant contact of the White House with the foreign ministers of the three European countries on the nuclear deal with Iran.

Undoubtedly, unless the European Union starts its thorough confrontation with the Trump government, and merely seeks to manage and restrain the behavior and actions of the U.S. President, the open and secret moves of the White House against the existence of the United Europe will intensify. The problem is that European officials may become aware of the deepness of this catastrophe so late, and at a time when there is no longer any signs of the United Europe! European leaders have now realized that “reconciliation with Trump” can no longer be considered as a healing solution for the transatlantic relations.

Nevertheless, they’re still keeping to regard the current relations in the international system idealistically, and especially in their relations with the United States they stick to this idealistic perspective. It’s quite obvious that the continuation of this strategic mistake in EU foreign policy will have irreparable costs for this block and the Eurozone. But it seems as if the authorities of European countries have failed to understand this fact so far!