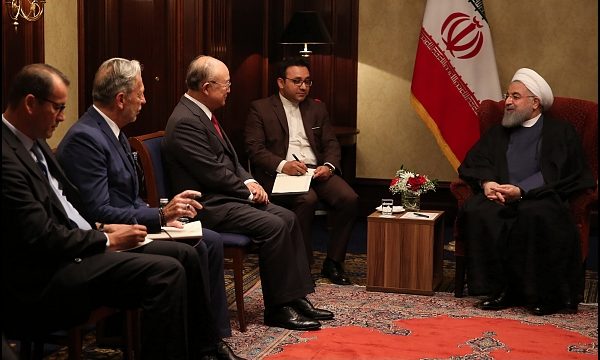 US main cause of changing Iran’s coop. level with IAEA

MNA – President Hassan Rouhani stressed that if the rights of the Iranian nation under the Joint Comprehensive Plan of Action (JCPOA) are not met, there is no reason for us to stay in the deal, adding “Iran’s nuclear activities have always been peaceful.”

Speaking with Director General of the International Atomic Energy Agency (IAEA) Yukiya Amano on Wednesday in Vienna, Rouhani said “JCPOA was a great success for diplomacy and IAEA and continuation of this success depends only on balance of all parties’ commitment.”

Referring to US’ withdrawal from the deal and the imbalance it has caused, the President said “in such a situation, the other signatories have the responsibility to counter this move and compensate for the imbalance of the commitments.”

“It is not logical that in a treaty, a party live up to all its commitments and the other party violates its commitments. If our nation’s rights are not met, we will make a new decision,” added Rouhani.

Director General of IAEA Yukiya Amano, for his part, pointed out the critical point in time and said “JCPOA was a great technical and diplomatic achievement and the agency has repeatedly verified that Iran has completely lived up to its commitments under the deal.”

He also appreciated Iran’s restraint after US’ withdrawal from the JCPOA.

President Rouhani’s two-leg trip to Austria and Switzerland is part of Iran’s effort to rally support for the nuclear deal from which the US pulled out back in May.