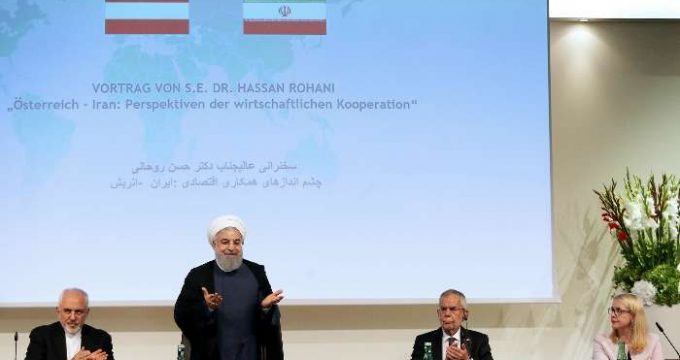 Speaking at the meeting of businesspeople of Iran and Austria on Wednesday in Vienna, President Hassan Rouhani said: “Today, some powers are trying to deprive people of their rights and national interests and it is our duty to stand against unlawfulness and unilateralism”.

He added: “US sanctions creates problems for people’s lives in Iran and is international crime”.

“Today, we are at a point in time that strong will of the two nations and governments are against powers that are seeking to deprive the human society of their rights,” he continued.

Dr Rouhani also said: “Today, we are facing some issues. The first issue is unilateralism and those who believe that other countries and investors and businesspeople must respect their laws and this means that they have to abandon their own national interests and think about another country’s national interests”.

“Today, some powers are seeking to deprive people of their rights and national interests and it is our duty to stand up to their unlawfulness and unilateralism and not yield to their pressures,” continued the President.

Stressing that a win-win approach is the basis of business, he said: “We want Austrian businesspeople to continue sending their goods and investment to Iran like before and vice versa, Iranian businesspeople who export goods to Austria or invest there to work the same way”.

He also went on to say: “Business is based on providing welfare for people and supplying their goods with more ease, and those who fights economic relations is in fact fighting people’s welfare and life”.

On US sanctions against the Iranian nation, the President of the Islamic Republic of Iran said: “This action by the US administration is a crime, oppression and violation of peoples’ rights if it’s not within the framework of international rules and regulations”.

Today, a group or a government want to violate rights that nations must enjoy based on international laws, said Rouhani adding: “We reached the Joint Comprehensive Plan of Action (JCPOA) with 6 countries, including the United States, and the IAEA is responsible for monitoring and UNSC resolution is responsible for supporting it”.

“Meanwhile, a country wants to take actions against rules and regulations and its commitments, which is not only to the detriment of the people of Iran and Austria, but also all of those who are willing to do business and provide mutual services to each other”.

He continued: “It is everybody’s human duty to confront the lack of commitment of a government and its opposition to the wishes of the global community”.

Stating that the era of US pressure and sanctions against the Iranian nation will be transient, the President said: “What will be remembered in history is how nations interact with each other. US Administration won’t have the power forever, but the relationship between Iranian and Austrian nations will be eternal”.

Dr Rouhani went on to refer to mutual trust between the two countries as the greatest support, saying: “Relations between businesspeople and investors of Iran and Austria has always been accompanied with satisfaction and trust”.

Iranians respect EU and countries with which it has friendly relations, he said, adding: “The people of the two countries enjoy mutual trust in each other and today, the required groundwork for taking advantage of mutual benefits is laid”.

He stated that his visit to Austria meant that the will of the two governments to develop relations was beyond JCPOA, saying: “Securing the interests of the two nations and countries is our main aim and I have no doubt that we will be successful in this path”.