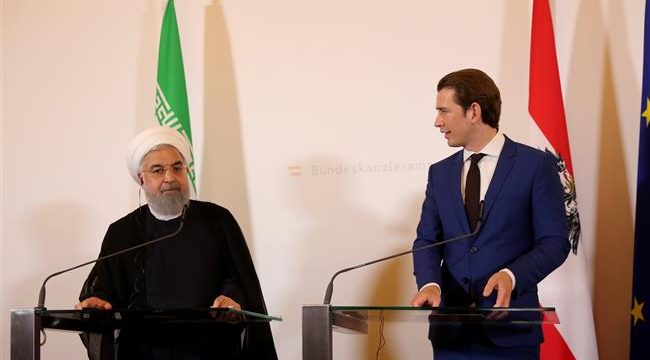 AP— Austria’s chancellor on Wednesday asked visiting Iranian President Hassan Rouhani for “full clarification” of the case of a Vienna-based Iranian diplomat suspected of involvement in a plot to bomb an Iranian opposition rally in Europe.

Rouhani was in Vienna, where his country’s nuclear agreement with world powers was drawn up three years ago, to promote the deal’s survival after the withdrawal of the United States.

A day earlier, Austrian officials announced that they plan to revoke the legal immunity of Vienna-based diplomat Assadollah Assadi.

Assadi was detained Sunday near the German city of Aschaffenburg on a European arrest warrant after a couple with Iranian roots was stopped in Belgium and authorities reported finding powerful explosives in their car. The website of the Austrian Foreign Ministry lists Assadi as a counselor at the Iranian Embassy.

Belgian authorities accuse Assadi of being part of a plot to set off explosives at a huge annual rally of the Mujahedeen-e-Khalq group in neighboring France, and want him extradited.

French police also detained a man of Iranian origin in France, and a judicial official said on Wednesday that a European arrest warrant was issued for the man in question, identified as 54-year-old Mehrdad A. It was not immediately clear when he would be extradited to Belgium, where he normally resides. The judicial official wasn’t authorized to publicly discuss an ongoing investigation and demanded not to be named.

Following the arrest of the Iranian diplomat, Iran’s ambassador was summoned to the Austrian foreign ministry on Monday.

Chancellor Sebastian Kurz said he discussed the issue with Rouhani during their long-scheduled meeting on Wednesday.

“We expect full clarification and I would like to thank you, Mr. President, that you have assured us of support for this clarification,” said Kurz, speaking alongside Rouhani.

In his comments to reporters, Rouhani didn’t mention the case. He and Kurz didn’t take questions, and there were also no questions allowed at a news conference earlier Wednesday with the Iranian and Austrian presidents.

Iran’s foreign minister called the allegations of a foiled extremist plot a ploy as Rouhani embarked on a visit to Europe.

On Wednesday, Iran’s semi-official Tasnim news agency reported that the man arrested in Belgium was a member of the Mujahedeen-e-Khalq.

Geir Moulson in Berlin and Elaine Ganley in Paris contributed to this report.