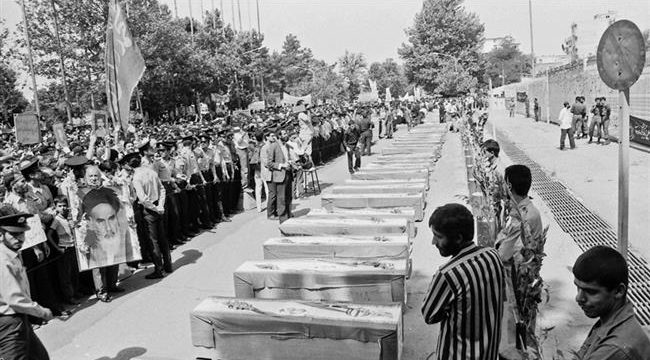 AP | Jon Gambrell: Mourners tossed flowers from a helicopter and a ferry into the Persian Gulf off the coast of Iran on Tuesday to mark the 30th anniversary of the U.S. Navy shooting down an Iranian commercial airline, which killed 290 people.

The July 3, 1988, downing of Iran Air flight 655 by the U.S. Navy remains one of the moments the Iranian government points to in its decades-long distrust of America. They rank it alongside the 1953 CIA-backed coup that toppled its elected prime minister and secured Shah Mohammad Reza Pahlavi’s absolute power until he abdicated the throne before the 1979 Islamic Revolution.

Today, as Iran grapples with America pulling out of the nuclear deal with world powers, officials linked their current woes to the 1988 disaster, insisting again that the U.S. cannot be trusted.

“This heinous crime is recorded in the memory of the great and brave people of this land and will never be forgotten,” Iranian Foreign Ministry spokesman Bahram Ghasemi said in a statement.

The attack on the flight followed what the U.S. Navy refers to as Operation Praying Mantis, a daylong naval battle in the Persian Gulf between American forces and Iran during the country’s long 1980s war with Iraq. That battle came after the USS Samuel B. Robertson struck a mine that the Americans later accused Iran of laying in the shipping channels it was trying to keep open for Kuwaiti oil tankers.

After the battle, U.S. forces continued to patrol shipping channels while Iran’s paramilitary Revolutionary Guard often harassed or swarmed incoming ships with smaller vessels. That’s a tactic used even today in the narrows of the Strait of Hormuz, through which a third of the world’s oil traded by sea passes.

Just after dawn on July 3, 1988, the USS Vincennes sent a helicopter to hover over Iranian speedboats the Navy described as harassing commercial ships. The Iranians allegedly fired on the helicopter and the Vincennes gave chase, the Navy said. Unacknowledged for years afterward by the Navy though, the Vincennes had crossed into Iranian territorial waters in pursuit. It began firing at the Iranian ships there.

As the fighting raged, Iran Air flight 655 took off from Bandar Abbas, Iran, heading for Dubai in the United Arab Emirates. The Airbus A300 began its ascent as normal, part of a twice-weekly route flown by the airline for over 20 years. The captain communicated with air traffic controllers in English, His last message was: “Thank you, good day.”

The Vincennes meanwhile had mistaken the commercial aircraft for an Iranian F-14, despite having state-of-the-art combat equipment at the time. The U.S. says the Navy made 11 radio warning calls on different frequencies before the Vincennes fired two missiles at the airplane, bringing it down and killing all aboard. The aircraft’s “black box” flight recorders were never recovered.

The deaths shocked Iran, even amid the carnage of the war with Iraq, which would kill 1 million people. Sixty-six of the dead were infants and children. Authorities lined up wooden caskets of some of the dead in front of parliament in Tehran. Iran ultimately would sue the U.S., reaching a $131.8 million settlement.

“It is now 30 years since the cowardly Captain Will Rogers, on orders from the rascal in Washington, Ronald Reagan, fired two missiles,” an editorial from the hard-line Kayhan International newspaper said Tuesday. “No amount of apologies — although Washington has offered none nor Tehran expects any — will ever wipe out the bitter memories of this dastardly deed.”

The newspaper also described the attack as “nothing new,” noting the U.S. pullout from the nuclear deal by “the current crook in the White House, Donald Trump.”

Linking Trump to the 1988 calamity might not be necessary. The typical Iranian already has enmity for the U.S. president, who included Iran in his travel bans. They also worry about Iran’s economy in the wake of the collapse of the 2015 nuclear deal, which saw Tehran limit uranium enrichment in exchange for sanctions being lifted. Airplane manufacturers, carmakers and oil companies all have pulled away from promised billion-dollar deals.

Iran’s government has contended with a series of recent protests across the nation. The Iranian rial has plunged to 90,000 to the dollar — double the government rate of 42,000. Meanwhile, demonstrators in the south clashed with security forces this week over a yearslong drought and water scarcity. Iranian authorities may hope to deflect internal criticism by portraying America as a past and present menace.

Foreign Minister Mohammad Javad Zarif has used his Twitter account to increasingly mock the U.S. since its nuclear deal pullout. On Tuesday, he noted how America now had cancelled civilian jet sales granted by the deal and that the USS Vincennes’ captain got a “medal instead of punishment” for the incident.