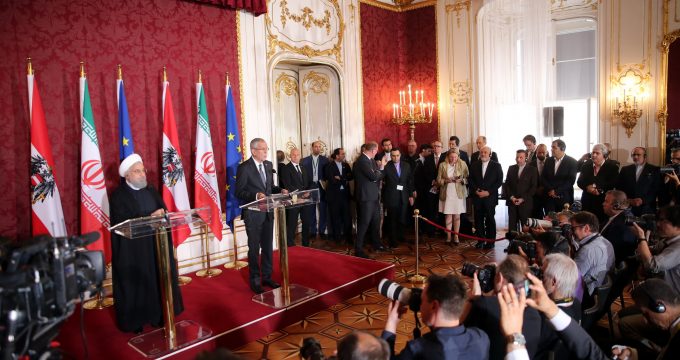 Time of unilateralism over; a country can’t decide for world, other peoples: Pres. Rouhani

president.ir- Presidents of the Islamic Republic of Iran and Austria had a joint press conference and stressed the importance of deepening relations.

Appreciating Austria’s warm welcoming of the Iranian high-ranking delegation, President Hassan Rouhani said on Wednesday in Vienna: “For us, Austria is a friend country in the European Union and in this region. Relations between the two Iranian and Austrian nations dates back to hundreds of years ago and has always been growing”.

He added: “After the Joint Comprehensive Plan of Action (JCPOA), the two countries engaged in many delegation exchanges and today, hundreds of Austrian companies are active in Iran”.

“The two countries voiced their determination in the discussions that we must continue our business, economic, cultural, regional and international relations,” added Rouhani.

JCPOA is a very important agreement for Iran, EU and the world, he said, adding: “What United States did was against the law, UNSC resolutions and multilateral obligations, and without a doubt, this will be to the US and others’ detriment”.

“The decision that the US has taken is not beneficial for anybody and is one of those weird decisions that a government makes, which is against its own and others’ national interests,” continued Rouhani.

The President of the Islamic Republic of Iran also said: “Iran will protect the nuclear deal if it can benefit from it, but this must be balanced and if signatories other than the US can guarantee Iran’s interests, Iran will stay in the deal without the US”.

“In today’s negotiations, we emphasised this point that the time of unilateralism is over and no country can decide for other parts of the world and other peoples and violate independence and sovereignty of other countries, because this is against the charter, international laws, interests of the world and global peace,” said Dr Rouhani.

Dr Rouhani also said that issues related to the critical region of West Asia were other topics of dialogue with Austrian officials and said: “In this regard, on issues like Tehran’s actions to fight terrorism and to help the Iraqi and Syrian people, the importance of helping the Yemeni people and the destructive role of some countries, including the United States and the Zionist Regime, were discussed”.

The president stressed: “Restoring peace and security to these countries will be in the interest of the region and the world. We also had discussions about other international issues. The views of Iran and Austria on JCPOA and the need to develop relations, as well as regional and international issues are close to ours”.

Dr Rouhani expressed hope that the visit would strengthen ties between Iran and Austria as two friend countries.

At the same press conference, President of Austria referred to the historic relations between the two countries and said: “Austria and Iran are celebrating the 60th anniversary of establishment of their political relation but the two countries’ relations goes back to 500 years ago”.

“I want to emphasise that a lot of Iranians are living in Austria,” said Alexander Van der Bellen adding: “Currently, hundreds of Austrian companies are active in Iran and Austria and the EU are doing their best to create the necessary framework not only for establishment of this cooperation, but also for deepening it in these hard times”.

“We discussed bilateral and regional issues with the President of the Islamic Republic of Iran,” he continued, saying: “Austria regrets that the US has withdrawn from the JCPOA and that they want to impose new sanctions, which will include Austria as secondary sanctions”.

He also went on to say: “These secondary sanctions, which we and the EU believe are extraterritorial, violate human rights.