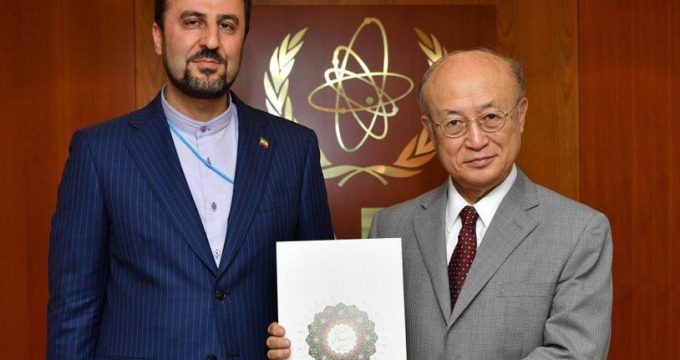 During the meeting, the new envoy hailed good cooperation between Iran and IAEA, stressing the need for promoting technical cooperation in line with peaceful use of nuclear energy in various fields.

Gharibabadi also called for dealing with different issues including safety, security, technical cooperation and Nuclear Safeguards in a balanced manner.

Pointing to Iran’s compliance with the Joint Comprehensive Plan of Action (JCPOA) which has been verified by IAEA for 11 times, he underlined independent, professional and impartial role of the UN nuclear watchdog.

Condemning US unilateral exit from the JCPOA as a flagrant violation of the international law and Resolution 2231, Gharibabadi said that the JCPOA is not a one-way path and preserving it requires all parties to fulfill their sides under the deal.

Amano, for his part, expressed pleasure with his appointment as Iran’s new envoy to the IAEA, saying that Iran is one of the major members of the agency whose cooperation with the agency has been reinforced over the past years.

He also underlined that IAEA as a technical and specialized institute has always tried to do its part objectively and impartially.

Amano also voiced readiness to have positive and regular interaction with Iran’s envoy, wishing success for him in his new position.