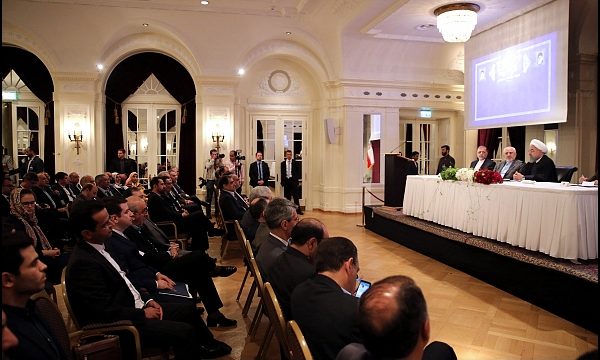 Iranians will never give in to foreign pressure: President Rouhani

Press TV – Tehran will never give in to pressure forced upon it by foreign countries,  said Iranian President Hassan Rouhani.

“We told all our foreign parties that if they speak to the Iranian nation with the language of logic and respect, then we can get problems solved problems… and that threats, pressure and humiliation will never work against the people of Iran,” said Rouhani on Monday while addressing a group of Iranians in Switzerland.

In relation to the US leaving the nuclear deal with Iran, Rouhani noted that, “Iran’s logic has not changed, one party without logic has left the Joint Comprehensive Plan of Action (JCPOA )with the goal of putting pressure on the Iranian nation,” he added.

The United States withdrew from the agreement in May, and said it would be re-imposing the sanctions lifted by the agreement. Washington has also threatened countries retaining trade with Iran with “secondary sanctions.”

Rouahni also noted that the US wants to fully prevent the export of Iranian oil. He stressed that it is not possible for the region’s oil to be exported while Iran’s oil is not.

“It would be meaningless that Iran cannot export its oil while others in the region can. Do this if you can and see its consequences, “said Rouhani.

Rouhani is currently on a crucial visit to Europe, where he is expected to discuss the fate of a nuclear agreement.

From Switzerland, the Iranian president will travel to Austria where he will meet President Alexander Van der Bellen and Chancellor Sebastian Kurz and oversee the signing of some documents for cooperation.

A key subject on the agenda, however, is a package which the Europeans are expected to offer to Iran in order to keep the country in the JCPOA.