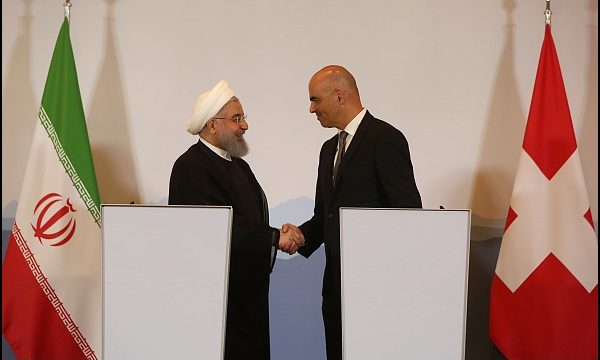 Speaking at a joint press conference with his Swiss counterpart Alain Berset on Tuesday in Bern, Dr Hassan Rouhani said: “We attach great weight to our relations with the friend country of Switzerland, which is known by the Iranians as a country with rich culture and science”.

“We have decided to develop our financial, banking and business cooperation, as well as investment, tourism and science and culture and I am confident that the two countries are determined to overcome the possible hurdles that will appear on the path of business relations,” he added.

The President also referred to the Joint Comprehensive Plan of Action (JCPOA) and added: “The two countries believed that the JCPOA is a great political achievement that was struck after long, intensive negotiations and the survival of this agreement is beneficial for Iran’s relations with other countries, as well as global peace and security”.

“As we have stressed before, we will stay in the deal until our interests in the JCPOA are secured and we can benefit from it,” added Rouhani.

He also said: “In our negotiations, we emphasised deepening scientific, cultural and technological relations between the two countries and it is very important for us to further develop these relations”.

Referring to housing 3 million emigrants in Iran and its high prices for the country, the President added: “All of these emigrants and refugees that are living in our country are enjoying free education in Iranian schools without any discrimination, as well as the same subsidies in energy and foodstuff that we provide to our own people”.

“We also stressed that the actions by some governments in the world that separate mothers from their children and have created a religious apartheid in visa and immigration are unacceptable,” he added.

Dr Rouhani also said: “In these negotiations, I emphasised that the blind sanctions against a great nation is the biggest violation of human rights in today’s world. The issues of global and Middle East peace and security was also stressed by the two Presidents and that Iran has played a very important role against terrorism in the region”.

“We are willing to discuss regional issues and the crises that exist in the region with Switzerland, especially about humanitarian aid and saving people who are under pressure, including in Yemen,” the President continued.

He also appreciated the warm hospitality of the Swiss government and people and wished success for the country’s football team in 2018 World Cup.

President of the Swiss Confederation also referred to the draft of road map for development of cooperation in different economic, financial, scientific and technical fields, as well as immigration, saying: “Since yesterday, we have discussed different issues including the nuclear deal and the consequences of US’ withdrawal from it”.

“Switzerland believes that the nuclear deal was a great success and an important victory for international diplomacy and is committed to its implementation. The agreement has been signed by several countries and is endorsed by United Nations Security Council Resolution 2231, and it is very important for the parties to cooperate in maintaining this agreement,” added Berset.

Referring to the state of the nuclear deal after US’ withdrawal, he said: “Today, we have deepened and continued our discussions on financial and economic issues, and we are very keen on scientific and research fields and welcome an Iranian scientific delegation in Switzerland”.

He also emphasised: “Switzerland is committed not only to multilateralism, but also to international law, along with continued dialogue and negotiations, but also continues its efforts to help engage in dialogue and exchange”.

Answering reporters’ questions on Iran’s reaction to US’ threats to block Iran’s oil export, President Rouhani said: “I believe that what US officials said about blocking Iran’s oil export is pointless and they will never be able to make it happen. This action by the White House is illegal, extraterritorial and in violation of all international commitments in the field of energy and trade. The idea that everybody can export oil, except for Iran, is incorrect and unwise”.

President of the Swiss Confederation also answered a question about US’ dissatisfaction over President Rouhani’s visit to the country, saying: “We also discussed other issues that we had different views on, including human rights and also Switzerland’s stance about the situation in the Middle East and recognising Israel”.

Then Dr Rouhani said: “I would like to make a point here. The honourable President of Switzerland referred to the Zionist Regime. Yesterday, I told him explicitly that Iran considers the Zionist Regime illegitimate and its actions in the region as aggression and condemns them”.