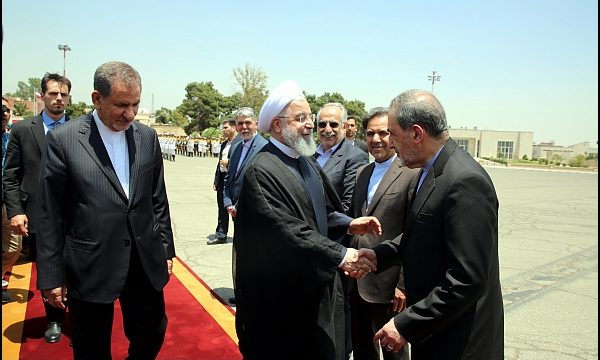 MNA – Iranian President Hassan Rouhani said the EU package to support JCPOA will be submitted to Iranian officials within days, underling his Euro visit aims at discussing the issue with Austria as the new president of the Council of the European Union.

Speaking among reporters on Monday, at Mehrabad Airport, Rouhani said “the accompanying delegation and I are heading to Austria and Switzerland upon the invitations of the two countries’ presidents, in response to their visit to Tehran.”

Rouhani added “our relations with Austria date back to 160 years ago and are important for both sides.”

President Rouhani stressed that Iran attaches great importance to deepening its relations with the European Union member countries, including Switzerland and Austria and said “tapping opportunities to develop relations with Bern and Vienna is one of the goals of this visit.”

Today, Europe is somehow different from the past, said Rouhani adding “today, Europe is announcing its opposition to unilateralism with a louder voice and explicitly declares its readiness to cooperate with Iran and influential countries on regional and international issues.”

President added “negotiations that led to the nuclear deal between Iran and 5+1 was hosted mainly by Switzerland and Austria, and the two countries were doing their best to create a good atmosphere for negotiations.”

Rouhani said “today, as Americans have withdrawn from the Joint Comprehensive Plan of Action (JCPOA) against international rules and multilateral commitments, communication and negotiation with Europe has a special role, since all five countries, including Russia and China, and three European countries and the European Union member countries are trying to stay in the deal without the United States.”

“Everyone feels that survival of deal is in the interests of the region and the world and unanimously condemn US for not adhering to Resolution 2231, which requires all countries to cooperate,” continued president.

“This visit is an opportunity to discuss the future of the JCPOA and the agreements with the European Union, especially since Austria has been in charge of the European Union’s rotating presidency since yesterday, and so we will discuss with Austria as the union’s chair,” said the president.

Rouhani said “Europeans are also set to present their package in the coming days, and we will discuss the matter with them. There are, of course, some regional issues that we will discuss with Europe on the role that Iran can play for stability and security of the entire Middle East region.”

“Among these issues are Syria, Yemen, and the oppressions that have been affecting the people of these countries. The whole world is responsible for the crimes against the Yemeni people,” added Rouhani.

He also referred to the signing of documents between Iran, Austria and Switzerland during the visit, adding “we will discuss the matter with senior officials in the field of industry commerce, health, treatment, modern technologies, education and water resources management, and documents will be signed in this regard.”

Rouhani said “we also have both businesspeople and representatives of the economic sectors of Iran with us during the visit to both countries, and we will have meetings with businesspeople and entrepreneurs in both capitals, Vienna and Bern, and will meet with dear Iranians in these two countries.”

President Hassan Rouhani left Tehran for Zürich on Monday on the first leg of his visit to Switzerland and Austria, which is taking place at the official invitation of the presidents of the two European countries.

JCPOA support package was drafted by France, the UK and Germany, the three European parties to the 2015 nuclear accord, as part of their efforts to salvage the pact. Based on the plan, the European Investment Bank is obliged to support European firms willing to enter Iranian markets.