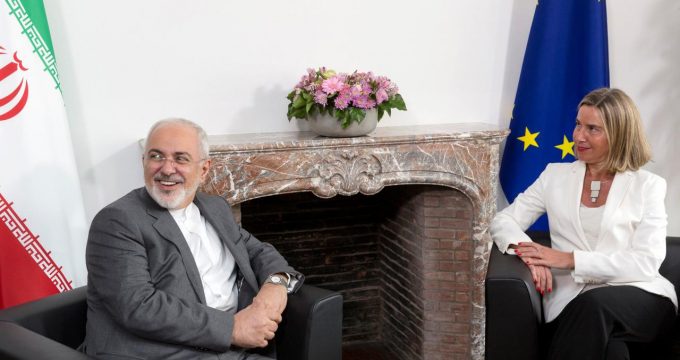 MNA – High Representative of the European Union for Foreign Affairs and Security Policy “Federica Mogherini has announced that the Europe’s package of proposals for preserving the nuclear deal will soon be delivered to the Iranian authorities.

The package is scheduled to be submitted to the diplomatic system and foreign policy apparatus of our country for less than 24 hours to be carefully analyzed. In this regard, there are some points that need to be taken into consideration:

1.The examination of the Europe’s package of proposals based on our “national interest” is the most important point that should be diligently considered at this critical period. Unfortunately, after the conclusion of the Joint Comprehensive Plan of Action (JCPOA), European countries, especially the European troika, haven’t made a good record in maintaining the nuclear deal. The accompaniment of Angela Merkel, Theresa May and Emmanuel Macron with Trump’s illegitimate demands for “changing the JCPOA” won’t be easily forgotten!

Meanwhile, over the past 15 years, the European troika has had a rather bad record in fulfilling the statements of Saad Abad and Paris. Hence, we can’t be optimistic about the Europe’s package of proposals for Tehran. The truth is that a rigorous and exact review of this package will to a great extent guarantee Iran’s rights (based on the nuclear agreement).

2. At this critical period and in reviewing the European’s proposals, it is necessary for our country’s officials to make a strategic, rational and determined distinction between the two words of “commitment” and “guarantee”. Undoubtedly, the Islamic Republic of Iran is not calling for the “repeat of Europe’s commitments on the JCPOA” over the next months, but seeking a guarantee of objectivity in these commitments. It should not be forgotten that not only during Trump’s presidency, but also during Obama’s time, the European troika refused to take effective steps to prevent the ban on the European banks to have connections with Iran.

They did not even accuse the US Treasury of violating paragraphs 26-29 of the nuclear agreement, and chose to sacrifice their legal obligations for the political conciliation with the current and previous governments of the United States. Therefore, the European Union is facing a tough test, and if it fails to pass this test for any reasons, there would no longer be a nuclear deal to continue.

3. Over the recent weeks, signals have been sent from the White House to the European troika regarding the JCPOA. US Secretary of State Mike Pompeo has announced that he will soon be discussing this issue with his European counterparts. No doubt, the more European troika is influenced by the United States in these talks, the farther it will be from reaching a reciprocal agreement with Iran. Last week, British Prime Minister Theresa May stated that Europe should enter into negotiations with the United States on the nuclear deal!

Undoubtedly, the British prime minister knows well that Trump isn’t going to change his negative attitude towards the JCPOA. Therefore, the British government is seeking to cooperate with the United States in opposition to Iran and the nuclear deal. This dangerous approach will result in the full annulment of the JCPOA, and the consequences will in no way be to the benefits of the EU member states.

4. Finally, it should be noted that coming up with new suggestions for preserving the JCPOA, is the last opportunity that the Iranian regime and nation have given the European authorities. Undoubtedly, negative records of the European troika won’t be ignored in this equation. But the opportunity is once again given to European officials to maintain the nuclear deal. If Europe loses this chance in compensating its mistakes, and consider the “JCPOA” as a political leverage to realize its transatlantic goals with the United States, then it would be a serious and strategic mistake. Therefore, dealing legally and rationally with the existing conditions is the main prerequisites for the maintenance of the JCPOA by the European Union.