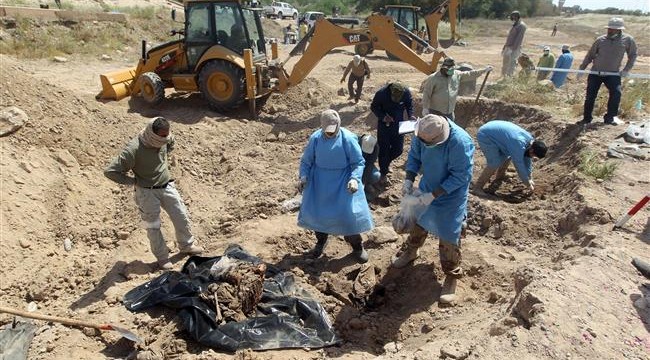 Press TV- Iraqi security forces have found a mass grave in the northern province of Nineveh, which contains the bodies of dozens of civilians believed to have been executed by Daesh Takfiri terrorists when they were in control of the area.

The Directorate of General Military Intelligence said in a statement on Monday that police forces made the discovery on a road linking the al-A’ayaziyah district of the provincial capital city of Mosul, located some 400 kilometers (250 miles) north of Baghdad, to the nearby town of Tal Afar, and the authorities have so far recovered the bodies of 25 people from the grave, the Arabic-language Iraqi News Agency reported.

Security forces have handed over the bodies to the forensic department in Mosul to be identified and returned to their relatives.

Wathiq added the mass grave contained the bodies of around 60 victims, noting that there were mostly the remains of women among the corpses.

The provincial police official further noted that the bodies had been transferred to the forensic department in Mosul to undergo DNA tests.

In early April, Iraqi forensic specialists found a mass grave containing the remains of about 160 victims of a June 2014 massacre by Daesh Takfiri terrorists at an air force camp in the country’s north-central province of Salahuddin.

Zaid Ali, head of the forensic office, said a joint team from his bureau and the Martyrs Foundation found 158 bodies inside the palace compound of former dictator Saddam Hussein in Tikrit, located 140 kilometers northwest of the capital Baghdad, on April 2.

He noted that DNA tests were being conducted on the corpses in order to identify them.

On December 9, 2017, Iraq’s Prime Minister Haider al-Abadi declared the end of military operations against Daesh in the Arab country.