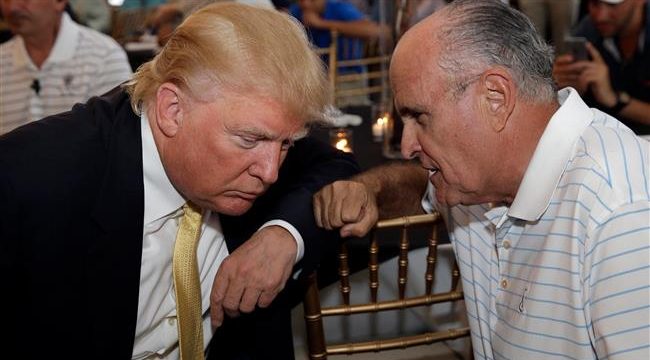 “Freedom is right around the corner … Next year I want to have this convention in Tehran!” the former New York mayor and White House cyber security adviser told the annual anti-Iran event on Saturday.

According to the British daily The Guardian, about 4,000 people attended the rally, many of them refugees and young eastern Europeans who had been bussed in for a weekend trip to Paris.

They consisted of an assortment of bored-looking Poles, Czechs, Slovaks, Germans and Syrians who responded to a Facebook campaign promising travel, food and accommodation to Paris for a mere €25, the paper said.

“Hundreds of Syrian refugees settled in Germany also attended. Many snoozed under trees during speeches,” it reported.

Giuliani was one of 33 senior US officials and military brass at this year’s conference on Saturday, the paper said. He is one of a long line of American conservative hawks to attend the annual event.

Another prominent guest on Saturday was Newt Gingrich, a former House speaker and a close Trump ally. Bill Richardson, former US ambassador to the United Nations, US energy secretary and Democratic governor of New Mexico, was also in attendance.

It was unclear if the speakers at the conference were paid, the Guardian said, noting that the MKO has been known for paying very high fees to US politicians.

“Most observers of Iranian politics say the MeK has minimal support in Iran and is widely hated for its use of violence and close links to Israeli intelligence,” the paper said, using an alternative name for the MKO.

The terrorist group is further detested for collaborating with the former Iraqi dictator Saddam Hussein during his war on Iran in the 1980s and killing as many as 12,000 Iranians in a violent campaign of assassinations and bombings.

The MKO was once listed as a terrorist organisation in the US and Europe and is still widely viewed as a Marxist cult built around the personality of its leader, Maryam Rajavi.

Some of its uncouth practices include forcing the group’s male members to divorce their wives and have them married to Rajavi’s husband Massoud.

The terrorist group is also known for its extremely suppressive control over members in its camps where access to the Internet and other information sources is prohibited.

In his address, nevertheless, Giuliani called for the Islamic Republic in Iran to be “replaced by a democratic government which Madam Rajavi represents.”

Giuliani claimed that the fall of the government in Tehran would be brought about by economic isolation.

“When the greatest economic power stops doing business with you, then you collapse … and the sanctions will become greater, greater and greater,” he said.

The guest of honor at last year’s conference was John Bolton, who has since become Trump’s third national security adviser. Bolton told the 2017 rally US policy should be to make sure the Islamic Republic “will not last until its 40th birthday” on April 1, 2019.