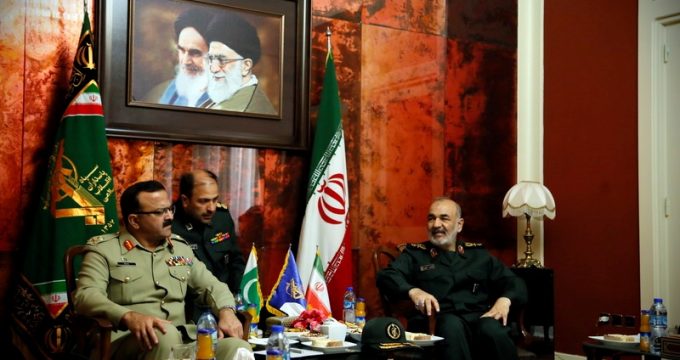 The two sides on Saturday also stressed expansion of cooperation to form a united and coordinated front to repel regional challenges.

Salami said Iran and Pakistan have been experiencing brilliant history of bilateral fraternal and cordial relations and they have been friends in need.

He also referred to sincere and heart deep feeling of Iranian leadership and nation to Pakistani people, and said Iranian and Pakistani capacities will benefit consolidation of bilateral relations. ‘By adopting a special approach we can expand cooperation in various fields, including in the defense and security domains to confront regional problems and challenges as a united and coordinated front.’

He praised Pakistan’s courageous and smart move in avoiding to enter the anti-Yemen coalition and appreciated Pak army for paying attention to security of common borders with Iran. ‘What we are witnessing in the region today is due to the US and Zionist regime’s crimes. They needed new tool to keep the satanic strategies in the region alive; so, to bridge their strategy and goals and undermine Muslim countries, they brought Takfiri terrorists into the scene and trained them.’

He said the target of Takfiri crimes and aggressions is beyond Iraq and Syria and reach regional states. ‘The Islamic Republic of Iran has a role in foiling the big and dangerous plot. Muslims are in the same boat and if Muslim countries are harmed, all Islamic countries are in fact in danger; so, we should take national interests and benefits of Muslim Ummah into consideration and act on failure of the plans and scenarios of enemies of Islam based on our historical duties.’

He went on to say that campaign against Takfiri terrorism and anti-security threats are priorities of the two countries and the IRGC is ready to put its experience at the disposal of Pakistan to promote the country’s army and nation. ‘Through expansion and deepening of defensive and security cooperation one can remove existing concerns in that domain.’

The Pakistani side in turn underlined joint efforts to upgrade facilities to establish regional security and consolidate border security.

‘We suffer from common threats on borders and to protect mutual interests and sources, precise and serious cooperation are on agenda of the defense, military and security forces of Iran and Pakistan.’