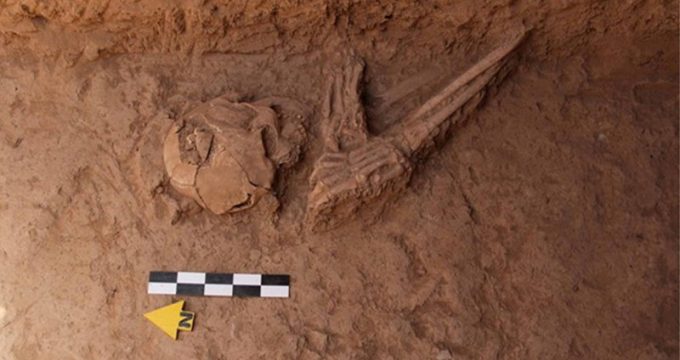 IRNA – The probing operations aimed at stratigraphy in Kalleh Koub Isak site in South Khorasan Province revealed new evidence from the beginning of the urbanization period in the eastern part of Iran.

The Public Relations Office of the Research Institute of Cultural Heritage and Tourism (RICHT) quoted Mohammad Hossein Azizi Kharangi, head of the archeology team, as saying on Tuesday that the main purpose of the exploration operations is to conduct relative and absolute stratigraphy of Kalleh Koub area and identify the cultural sequence of the prehistoric settlements in the site.

He added to this end, two 2×2 boreholes were made in the central part of the area along with the previously explored boreholes.

According to the archeologist, the location of the Kalleh Koub and its placement on the edge of three very active alluvial fans, the high rate of sedimentation in the plain, and placement amid one to one and a half meters of highly fertile alluvial deposits of sedimentary layers on the site, has attracted the attention of farmers to the area.

He said: “Unfortunately, Kalleh Koub has been completely flattened and the dispersion of cultural materials over the surface of the site does not contribute to archeological understanding.”

The head of the archeological team further remarked that the city of Sarayan is located in the northwest of South Khorasan Province, and the climate of the region due to the mountains in the northern part of the city and, presence of desert plains in the south, is divided into two types of cold and warm and dry.

He added that the northern regions where there are numerous mountains and green valleys are cold in the winter and mild in the summer, but most of the area is covered with plains and deserts.

The archeologist, referring to the observations and findings obtained in the survey of the aforementioned area and the available documentation, reiterated that the site had enjoyed development in the distant past.

According to him, existence of freshwater shellfish is an indication of the neighborhood of the area with permanent water resources and this issue, proximity and access to water, is one of the most important reasons for the possibility of the place being a settlement area which can undergo more accurate surveys in order to find out its span and adjacency with other settlements.

Referring to the registration of the Kalleh Koub site located in the town of Isak in the city of Sarayan in South Khorasan Province in the list of national monuments in 2008, he said the height of the site is about 1360 meters from the sea level and its span, based on the probing operations conducted in the past, is about 7 hectares.

Regretting that eastern areas in Iran, particularly South Khorasan Province, have been completely ignored in the studies of prehistoric archeology, Azizi pointed out that very few works from this long period of Iran’s archeology have been reported in this area, and for this reason these areas are introduced as the white spots empty from archeological information in the archeological map of Iran.

He argued that one of the archeological problems in the prehistoric era in this region is its localized clay works and lack of the possibility to compare them with the surrounding areas, adding that this factor has caused archeology to be deprived of the possibility to identify and provide relative and comparative chronology in the area on the basis of clay works which are the prerequisite for the prehistoric studies.

The archeologist said that the Kalleh Koub site is one of the few prehistoric areas identified in South Khorasan Province, which has a suitable cultural sequence from the 5th to 3rd millennium BC, and exploration operations in the site can be used as a basis for future archeological studies in South Khorasan province.