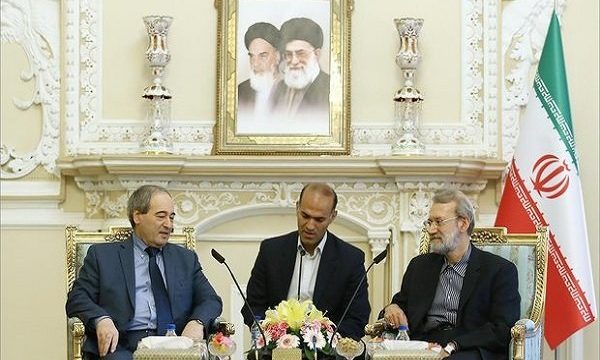 US will be forced to leave Syria

He made the remarks in a meeting with Iranian Parliament Speaker Ali Larijani on Tuesday in Tehran.

Mekdad went on to say that Syria couldn’t defeat terrorism without the help of Islamic Republic of Iran.

Saudi Arabia is the main supporter of terrorism in Syria, he said, adding, “we believe that if Saudi Arabia wasn’t supporting Israel, US would have never found courage to relocate its embassy from Tel Aviv to al-Quds.”

Elsewhere, Syrian diplomat said that Joint Comprehensive Plan of Action (JCPOA) was in favor of all Arab states and would lead to enhancing friendship and peace in the region, adding, some states including Saudi Arabia not only organized conspiracy to terminate the deal, but also provided financial support to Israel.

Larijani, for his part, said that Syrian nation’s resistance have produced good results.

Syria’s status is improving day by day, he added.