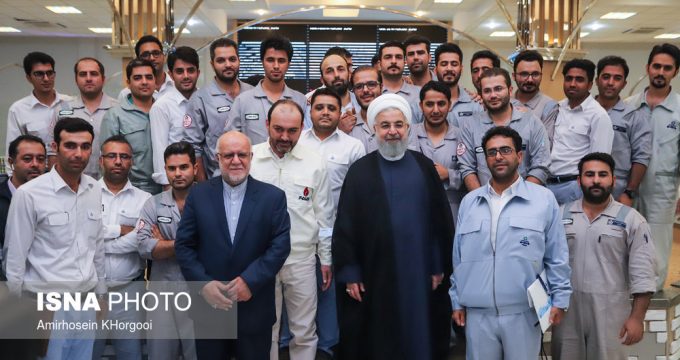 MNA – President Hassan Rouhani said Thu. that Iran’s Persian Gulf Star Refinery in the southern province of Hormozgan is an “exceptional” project in the region and across the world.

The Iranian president made the remarks at Bandar Abbas Airport on Thursday morning. He is in Hormozgan to inaugurate the second phase of the Persian Gulf Star Refinery, which is the first of its kind to use gas condensate feedstock recovered from South Pars gas field shared by Iran and Qatar in the Persian Gulf.

“The aim of this visit is to monitor the progress of this highly significant project,” said President Rouhani.

He noted that the first phase of the project came on stream in March 2017, and voiced hope to see the inauguration of other sectors and phases of the refinery in the near future.

The second phase of the refiney is expected to add 12 million liters of Euro 5 gasoline to Iran’s capacity of the product, according to NIORDC the managing director Alireza Sadeq-Abadi.

Developed by Khatam al-Anbia Construction Base, a conglomerate affiliated with the IRGC, the refinery has a processing capacity of roughly 360,000 barrels of gas condensate a day upon becoming fully operational in 2018. The project is estimated to be completed at a cost of approximately $3.4 billion.