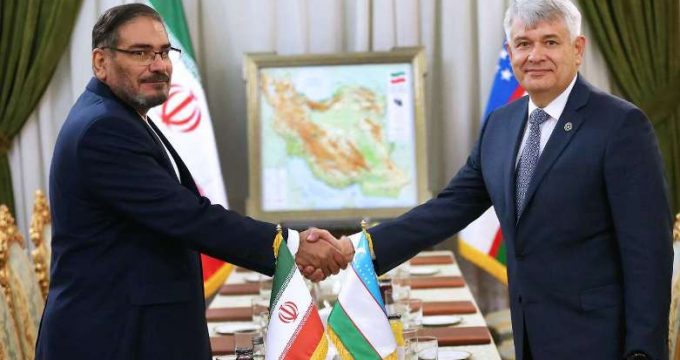 Shamkhani made the remarks Tuesday in a meeting with Secretary of the National Security Council of Uzbekistan Viktor Makhmudov.

Iran and Uzbekistan can help improve security and economic conditions in Afghanistan by boosting cooperation and supporting government and national unity in the country, he reiterated.

Elsewhere in his remarks, Shamkhani underlined the importance of fighting terrorism, extremism and separatism as common problems in the region, saying Wahhabism is the ideological context of takfiri terrorism based on which Daesh has been supported by some global powers and some stupid regional countries.

He referred to US aims to manage and to take advantage of terrorism as a tool and expressed concerns over transporting Daesh to Afghanistan and Central Asia.

Islamic Republic of Iran is ready to transfer successful experiences in fighting terrorism to other regional countries, he added.

He stressed establishing multilateral economic cooperation focusing on creating access for Uzbekistan to other countries’ markets through Chabahar Port.

Facilitating Uzbekistan-Turkmenistan-Iran-Oman corridor can create considerable leap in developing trade and commercial relations among these countries, he noted.

He pointed to regretful and bloody events in Afghanistan as bringing about discontent and affliction for all regional countries.

He also emphasized the need for a serious regional movement to assist Afghan government in fighting insecurity and instability.

Referring to extensive capacities of both countries in economic, transit, energy and security cooperation fields, Makhmudov said the constructive ties between the two countries are not against any other country and will not be influenced by third-party countries’ measures.