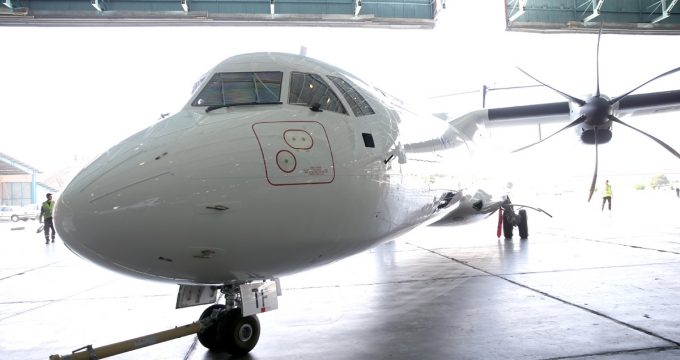 Press TV – Regional aircraft manufacturer ATR says it must give up delivering the remaining aircraft ordered by Iran because of new US sanctions and that it will try to reclassify 12 aircraft if it does not obtain a waiver.

“In 2018, our delivery target could be impacted given the Iranian context,” ATR CEO Christian Scherer said in an interview published on LaTribune.fr.

IranAir, the national flag carrier, signed a contract to buy 20 planes from turboprop maker ATR in April 2017. The deal came after Iran signed contracts with Europe’s Airbus and US rival Boeing to purchase about 180 jets.

“Of the 80 planes we expected to deliver in 2018, there were 12 for Iran, that’s a lot,” said Scherer whose company is joint-owned by France-based Airbus and Leonardo of Italy.

Iran took delivery of the first four ATR aircraft last May, two more in September, beside another two in December, with the rest due to be handed over to the country by the end of 2018.

Scherer said the Iranians want to take delivery of the planes, “but ATR will not take any risk of falling out with US authorities and exposing our shareholders Leonardo and Airbus to US sanctions.”

He said two aircraft have already been completed, six are being assembled and the last four have been launched and “customized” for Iran, particularly with pressurization devices, to fly over mountainous areas.

As a result, “these devices will be harder to reclassify,” he continued. “We are working hard but we have no firm tracks yet.”

To still deliver to Iran, ATR is trying to get a waiver from the Americans, but Scherer said he was “not entirely confident” about it.

“The Americans have promised a three-month period (from May to August) to allow companies to deliver the materials that were in production” after US President Donald Trump’s announcement to reimpose sanctions on Tehran.

“For the aviation industry, this three-month period is ridiculously short,” Scherer said.

ATR, Scherer said, intends to rely on the help offered by the French government to protect companies.

“We want to use the help of the French government to negotiate the best possible licenses during this period of three months to be able to deliver the aircraft manufactured or being  manufactured to cushion this shock, which in any case will hurt us a lot.”

He also hoped to continue business in Iran with “a new license to support our customer, and we want to play our role as an after-sales service provider.”

“Here too, the Americans have made a declaration of intent explaining that they will not endanger the public,” Scherer said.

“The Iranians were in discussion with us to continue to develop their fleet; we were not going to stop at the first 20 aircraft” ordered in total by Iran, he said. “It was just the beginning of a story,” he lamented.

IranAir’s deal with ATR includes options for a further 20 aircraft and a training program for Iranian pilots and engineers.

The 70-seat planes are aimed at underserved local economies, used in flights over a maximum distance of 1,528 kilometers.

Iran has also received three Airbus jets – one Airbus A321 and two Airbus A330 – and will get another by year-end, but US sanctions have put further deliveries in doubt.

The first Boeing was due in Iran around May 2018, but the company said early this month that it will not deliver any aircraft to Iran in light of US sanctions.

Boeing in December 2016 announced an agreement to sell 80 aircraft valued at $16.6 billion to IranAir. It also announced a contract in April 2017 to sell Iran Aseman Airlines 30 Boeing 737 MAX aircraft for $3 billion, with purchase rights for another 30 aircraft.

“We have not delivered any aircraft to Iran, and given we no longer have a license to sell to Iran at this time, we will not be delivering any aircraft,” a Boeing spokesman said.