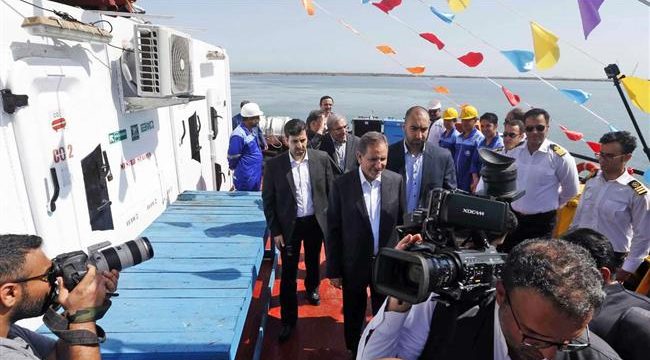 Press TV- A freight train from China arrived in the Iranian city of Bandar Anzali on the Caspian Sea Tuesday, marking a new trade link with world countries and giving a fresh boost to the “Silk Road” revival.

First Vice President Es’haq Jahangiri attended a ceremony to inaugurate the rail service which he described as “very important”.

“Today, the first cargo through the China-Kazakhstan-Iran transportation corridor entered the Anzali Free Zone, connecting China to the Kazakh port of Aktau and Iran,” IRNA news agency quoted him as saying.

First Vice President Es’haq Jahangiri talks to reporters during a visit to Bandar Anzali on June 26, 2018. (Photo by IRNA)

“This route is very important, and we hope that our relationship with neighboring countries, especially China, will expand because this relationship will also expand our strategic ties with other countries,” he added.

The route is part of a transcontinental rail service spearheaded by China under its “One Belt, One Road” policy to carry cargo between the Far East and Western Europe.

Iran is a key part of the $8 trillion project to increase trade and open new markets, which has strong political backing from top leaders for economic and strategic reasons.

The southern route sees freight from China cross into Kazakhstan before joining up with Trans-Siberian railroad at Yekaterinburg in Russia. China plans to extend it to Western Europe via Central Asia, Iran and Turkey and the Balkans.

The first train from China arrived at Tehran railway station in 2016, marking an important symbolic milestone in developing the route and stimulating the Silk Road revival.

The rail service offers a faster option than sea freight but a cheaper one than air cargo. It also boosts economic integration among the Shanghai Cooperation Organization (SCO) countries.

“The Silk Road is a sign of Iran’s cultural, historical and civilizational ties with neighboring countries,” Jahangiri said.

Jointly led by Russia and China, the SCO is going from strength to strength after India and Pakistan joined the bloc last year, while Iran has been knocking at the door.

The SCO accounts for over 60 percent of the Eurasian landmass, nearly half of the world’s population and over 20 percent of global GDP.

When the first freight train from China arrived in Tehran in February 2016, it carried 32 containers on a 14-day journey which was 30 days shorter than the time usually taken by ships to sail from Shanghai to Iran’s Bandar Abbas port.

China plays a central role in Iran’s railway modernization and expansion plan under which Tehran seeks to invest $25 billion over the next 10 years in the sector.

China is Iran’s largest trading partner and long-time ally, with the two countries having agreed to boost bilateral trade by more than 10 times to $600 billion in the next decade.