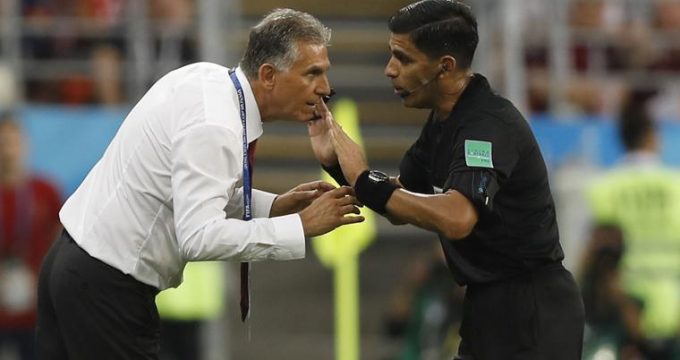 AP — Iran coach Carlos Queiroz was so furious with the World Cup’s video assistant referee system that he ranted for more than 20 minutes about FIFA’s new tool following a draw with Portugal that knocked his squad out of the tournament.

“I’m not talking about the ref, talking about one system,” Queiroz said in English. “Thousands of dollars, five guys sitting upstairs and they don’t see an elbow? Give me a break.”

Queiroz was angered that Portugal star Cristiano Ronaldo was not issued a red card when his elbow struck Iran defender Morteza Pouraliganji in the face. Ronaldo had aggressively initiated contact from behind on the play.

The Iranians already felt VAR had robbed them when a goal was overturned by the new review process for offside in a 1-0 loss to Spain. The day before Monday night’s Group B finale between Iran and Portugal, Queiroz said he supported the video review for obvious mistakes. But he made it clear he was against its overuse in this tournament to address debatable judgment calls.

Queiroz said coaches also must be kept informed in real time — or be able to see the replays themselves — as plays are being reviewed.

“The only people who cannot see what happens in the game is the coach,” Queiroz said. He added that FIFA president Gianni Infantino “needs to say, ‘Something is wrong here. We need to make it right.’”

Queiroz strongly stated his belief that FIFA is doing a poor job making it clear to the public what is being reviewed and why calls are changed.

Instead, he said the system allows referees to “wash their hands” of controversial calls, and was upset that coaches get no timely information.

“There are few people that are running the show behind the scenes,” he said. “The truth must be respected and we need to know who is refereeing the games.”

Queiroz has a reputation for speaking his mind — at length — and did so when he was asked about throwing his jacket down on the field during the game. The outburst occurred after Ronaldo was awarded a penalty kick for a collision with Iran’s Saeid Ezatolahi in the area.

“The temperature in my body, , it comes from 46 (Celsius) to 250, so you understand why I need to take the jacket off,” he said. “The question for me is not about the refs. It’s about the attitude, and the decisions must be clear for everybody, for the people. Everybody agrees that VAR is not going well. There are a lot of complaints.

“You know how many people sacrificed to come see this game in Russia? They have the right to know what is going on,” Queiroz added. “There is no room for human mistakes. Human mistakes was before (VAR). We accept that. That was part of the game. Players make mistakes. Coaches make mistakes and referees make mistakes. But now we have one system that costs a fortune — a fortune. High technology. People inside, wherever, nobody takes responsibility.”