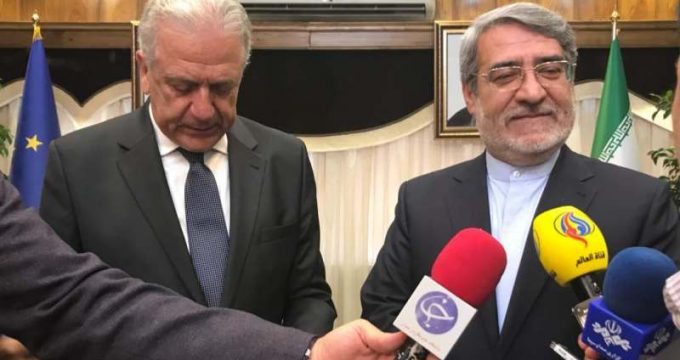 IRNA – Iranian Minister of Interior Abdurreza Rahmani Fazli demanded on Monday that the European Union to continue with its aid to the Afghan refugees residing in Iran.

‘Iran cooperates with the EU in migration and the EU is interested to expand ties,’ said Rahmani Fazli in Tehran in a meeting with European Commissioner for Migration, Home Affairs and Citizenship Dimitris Avramopoulos.

The Iranian interior minister reiterated that the refugees residing in Iran live like Iranians, and said, ‘With regard to the pressures on Iran, we expect the UN and the EU to develop the situation in Afghanistan in a way that Afghan refugees voluntarily return to their home country.’

Rahmani Fazli said that the help provided by the UN is a very small amount.

He also added that the EU once again emphasized the Iran Deal and expressed support for it.

Saying that Afghanistan has produced 10,000 tons of narcotics this year, Rahmani Fazli added that Iran is economically and socially harmed more than any country.

He said a report about Iran’s fight on terrorism was given in the session and added that the European partner is willing to cooperate with Iran on the issue.