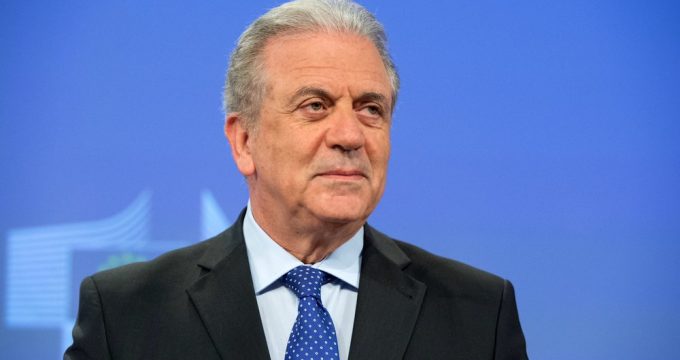 EU, Iran to cooperate in areas of common interest: commissioner

Tehran Times- The European commissioner for migration and home affairs who is paying a visit to Tehran says the European Union and Iran have politically agreed to restart dialogue and cooperation in several areas of “common interest”.

“Almost two years ago, following the entry into force of the Joint Comprehensive Plan of Action agreed by Iran, five permanent members of the UN Security Council plus Germany and the EU, the EU and Iran have agreed at political level to kick start dialogue and cooperation in several areas of common interest,” Dimitris Avramopoulos tells the Tehran Times in an exclusive interview.

Avramopoulos, who described the objective of his trip to Tehran to address “migration management and drug abuse and trafficking” with related Iranian authorities, assured that the EU addresses the root causes of migration by “improving the situation and creating economic opportunities in countries of origin, fighting smugglers and traffickers, improving living conditions and protection of asylum seekers and refugees.”

Below is the full text of interview with the European commissioner:

Q: Last year, you threatened the EU states that had refused to step up to take in illegal immigrants such as Poland, Hungary, and the Czech Republic. Has the approach been effective to motivate European countries to respond more positively to desperate immigrants who have fled war and famine?

“The EU and Iran are already contributing to achieve a common objective – providing relief to refugees.”A: It is important to highlight that the EU relocation program aims to help people in need of international protection in Greece and Italy to find new homes in other EU member states. The main goal is on one hand to provide protection to those fleeing war and persecution, and on the other to support and show solidarity with EU member states most affected by migratory pressure. This is precisely what was achieved, to an unprecedented level.

Unfortunately, much to my regret some decided not to show solidarity and did not respect their legal obligations. We have therefore launched legal actions against Poland, Hungary, and the Czech Republic.

But I wish to underline that in general the EU relocation program is a success. Over 34,000 persons – more than 96% of all eligible persons registered – have been relocated from Greece and Italy and almost all member states have actively contributed. It has been a positive experience of responsibility sharing and EU solidarity. It has shown that when we work together towards a common goal, we can achieve very important results with positive outcomes for the EU as well as for people fleeing war and persecution.

Q: Many lives are at stake in Yemen and many have been displaced in the poor country since Saudi Arabia attacked the country in March 2015. What solution has the European Commission thought of for the refugee crisis in the country?

A: I am aware of the terrible humanitarian situation in Yemen. The EU has always reiterated its firm belief that violence will just protract the horrific suffering of millions of civilians. The EU has called on all the parties to respect International Humanitarian Law, to urgently agree on a cessation of hostilities, and to engage in a negotiation process.
The Commission’s response was immediate and focuses on mobilizing humanitarian aid in Yemen. Since the beginning of the crisis, the EU has made available almost €440 million in funding to Yemen, with over €100 million announced just a few days ago at the pledging conference in Geneva. Our support is notably aimed at providing emergency humanitarian assistance for life-saving aid across a wide range of sectors such as health, nutrition, food security, protection, shelter, and water and sanitation.

“I am pleased to note that as long as we are both open to give hospitality to persons in need of international protection, we share a similar approach.”
In addition to that, with our support, we are also helping laying in Yemen the groundwork for more sustainable cities once the conflict is over, and to provide flexible and effective support to the peace process and the ensuing political transition.

Q: As the world silently watches the war on Yemen, millions more in Syria have also become victim of another atrocious war that has left more than 6 million internally displaced, and around 5 million refugees outside Syria. What has your organization offered to relieve the refugee crisis in Syria?

A: Since the beginning of the conflict in 2011, the European Union has been very active on the ground and a leading donor, with over €10.6 billion mobilized for humanitarian, stabilization and development assistance in favor of Syrians.

The EU’s humanitarian assistance has reached millions of people in need inside Syria and in surrounding refugee-hosting countries (such as Turkey, Jordan, and Lebanon), providing shelter, food, water and health care as well as support livelihoods, facilitating people’s access to basic services and strengthening local institutions.

The EU will continue to play its part fully and will use the second Brussels Conference on Syria at the end of April to continue promoting the cessation of the hostilities, the delivery of humanitarian aid to and the protection of the civilians inside Syria, as well as to renew its support to hosting communities in neighboring countries.

Q: Has the EU commission thought of a fundamental solution to tackle the root causes of migration from Afghanistan, Africa and the volatile Middle East to Europe?

A: The European Union, which is already the biggest donor worldwide of development aid, is also in the lead in putting in place initiatives aimed at specifically addressing the root causes of migration by improving the situation and creating economic opportunities in countries of origin, fighting smugglers and traffickers, improving living conditions and protection of asylum seekers and refugees, strengthening border protection and increasing cooperation on return.

We have put in place an ambitious European External Investment Plan that will mobilize up to €44 billion to support investments in partner countries in Africa and the European Neighborhood to improve economic and social development and create jobs and growth.
Specifically for Africa, we have established an Emergency Trust Fund with the aim of funding projects for over €3.3 billion to address root causes of instability and forced displacement in key African countries of origin and transit.
Many other programs have been launched by the EU in countries of origin and transit located in other regions of the world, to promote their development, build their institutions, strengthen their security, or to provide assistance to their refugees and internally displaced persons. This is the case for instance for countries like Afghanistan, Iraq or Syria.

Q: As of today, Iran hosts some 2 million registered and unregistered Afghan refugees. What facilities have the EU Commission provided for a safe and voluntary repatriation of them?

A: Since December 2017, the EU is fully supporting the reintegration of Afghan migrants and internally displaced persons returning back home from whichever country. More specifically, a €39 million program was put in place for that scope, as well as to develop and implement the capacities at local level to give support to the returnees. This program is in place in Afghanistan and is open to any Afghan returnee, independently on the country from which he or she is returned.

Q: What do you hope to achieve from your trip to Iran?

A: Almost two years ago, following the entry into force of the Joint Comprehensive Plan of Action agreed by Iran, five permanent members of the UN Security Council plus Germany and the EU, the EU and Iran have agreed at political level to kick start dialogue and cooperation in several areas of common interest.
Two of these areas – migration management and fight against drug abuse and trafficking – are under my direct responsibility and it is now time to start our dialogue and our cooperation in these two areas of common interests. This is the main objective of my visit.

Q: In what ways can Iran and the EU Commission join hands and extend cooperation in dealing with refugee crisis worldwide?

A: In relation to migration and refugee issues, the EU and Iran have some common challenges and interests since we face similar situations as a country and region of destination of migrants and refugees. I am therefore pleased to also note that as long as we are both open to give hospitality to persons in need of international protection, we share a similar approach.
While operating in a separate manner, the EU and Iran are already contributing to achieve a common objective – providing relief to refugees. We can deepen this cooperation. We may also work together in view of addressing other refugee crises, notably by promoting measures facilitating the solution of these crises and giving assistance to their victims.

I refer here for instance to the situation in Syria. The EU calls on all parties involved to take all the necessary measures to ensure an immediate cessation of hostilities, to allow for urgent access of humanitarian assistance and medical aid to the whole population, and to ensure the protection of civilians by respecting the International Humanitarian Law. This needs to be a priority for every party.

Q: The U.S. announcement of 08/05/2018 to re-impose sanctions previously lifted under the JCPOA in August and November of this year will have negative impacts on Iran’s economy and consequently on refugees, mostly Afghans, who sought refuge here. With long history of hosting refugees, Iran seems to be getting penalized rather than rewards from the international community for embracing people from the war-torn states. Where does the EU commission stand on that issue, and what can it do to help Iran get over these tough times?

A: The European Union remains fully committed to the implementation of the JCPOA. Sanctions-lifting is an essential part of the JCPOA and we view it as vital that the economic dividends flowing from the nuclear deal continue to be felt directly by the Iranian people and Iranian businesses.
The European Commission is working on measures to preserve the JCPOA following the U.S. withdrawal and to mitigate the impact of U.S. sanctions on EU companies legitimately investing in Iran, as well as sustain our overall cooperation with Iran. We are looking for measures to ensure that banking services between the EU and Iran can continue. This work is ongoing at expert level and should be finalised soon.
Undoubtedly, the overall economic situation in Iran has an impact on vulnerable populations, including Afghan refugees. In 2017, the EU allocated almost €10 million to deliver vital assistance to Afghan refugees in Iran. The European Commission has also included Iran as beneficiary of a €200 million package to help address the issue of chronic displacement in the region. The EU stands ready to continue its engagement with Iran on the issue of displacement in the region, including through the setup of a comprehensive migration dialogue.