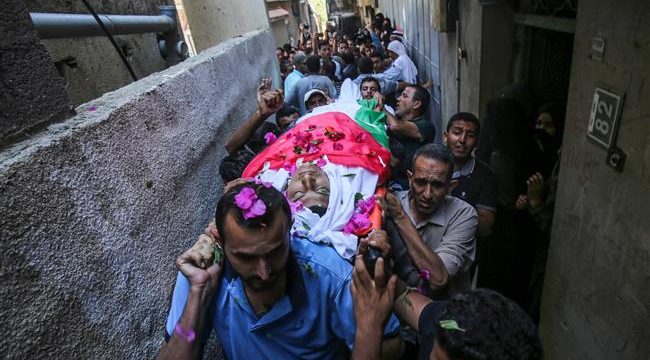 Press TV- A young Palestinian man, who was critically wounded by Israeli army gunfire earlier this week during an anti-occupation protest along the border between the besieged Gaza Strip and occupied territories, has succumbed to his injuries.

The spokesman for the Gaza Ministry of Health, Ashraf al-Qidra, said in a statement that 29-year-old Osama Khalil Abu Khater succumbed to his wounds on Sunday morning.

He had been shot and wounded in the abdomen east of Khan Yunis, located 7 kilometers northeast of the border town of Rafah, on June 22.

At least 132 Palestinians have been killed by Israeli forces since the “Great March of Return” began in the Gaza Strip on March 30. Fifteen children and a woman are among the fallen Palestinians.

A total of 14,811 Palestinians also sustained injuries, of whom 366 are reportedly in a critical condition.

The Gaza clashes reached their peak on May 14, the eve of the 70th anniversary of Nakba Day (Day of Catastrophe), which coincided this year with the US embassy relocation from Tel Aviv to occupied Jerusalem al-Quds.

Relatives mourn during the funeral of Palestinian Osama Khalil Abu Khater, who died of wounds he sustained after he was shot by Israeli troops during a protest at the Israel-Gaza border, in Khan Yunis in the southern Gaza Strip, on June 24, 2018. (Photo by AFP)

On June 13, the United Nations General Assembly adopted a Turkish and Algerian-sponsored resolution, condemning Israel for Palestinian civilian deaths in the Gaza Strip.

The resolution, which had been put forward on the behalf of Arab and Muslim countries, garnered a strong majority of 120 votes in the 193-member assembly, with 8 votes against and 45 abstentions on Wednesday.