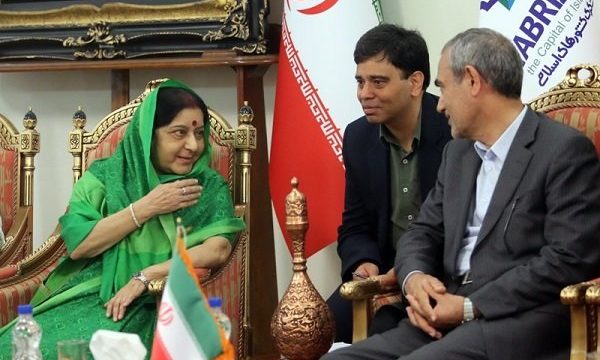 She made the remarks in a Sunday meeting at Tabriz International Airport with East Azarbaijan’s provincial governor Majid Khodabakhsh. Indian officials came from their European tour and had a short stay in Tabriz for refueling the plane.

Touching upon her visits to different European countries, Swaraj highlighted Joint Comprehensive Plan of Action (JCPOA) was one the main topics of all their meetings.

Indian Foreign Minister said that she has told French president Emanuel Macron that if Europe wants Iran to stick to its commitment, Europe should also adhere to commitments with regard to providing financial support to Tehran.

If Europe and Iran agree on do their financial transactions in Euro, India is also ready to use this currency for trading with Iran, she added.

Khodabakhsh, for his part, appreciated India’s relations with Iran, especially in the previous sanctions period.

He said the common ground between Iran and India has been their struggles to achieve freedom, adding that Iran deeply respects Mahatma Gandhi.

Obtaining freedom from colonizers is costly and Iran is ready to pay the cost, he highlighted.

He expressed happiness regarding India’s economic growth, hoping that these achievements would persist.