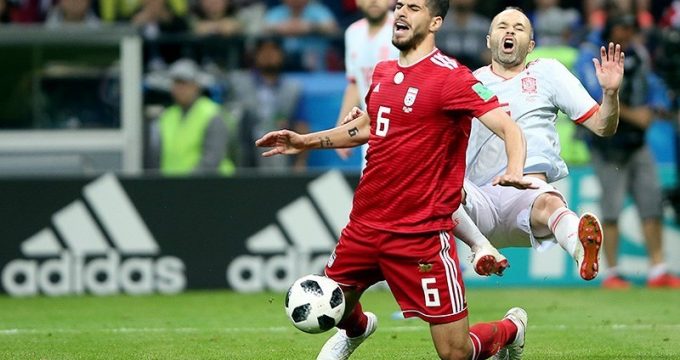 Tasnim – Saeid Ezatolahi says they are ready to defeat Portugal to advance to the 2018 World Cup next stage.

Spain took all three points at Kazan Arena on Wednesday t hanks to a fortuitous Diego Costa goal to leave Carlos Queiroz’s side needing to beat his countrymen in their final group match in Saransk on Monday to advance to the Round of 16.

“Our full concentration is now on Portugal and we have a very hard task ahead of us, but we are determined to get this win,” said the midfielder, who missed Iran’s win over Morocco in its opening game due to suspension.

“We will be working hard to get this win and to qualify for the next round.”

“The result against Spain could’ve been better for us, we deserved more but this is why we call it the beautiful game. Sometimes the ball just doesn’t go in the goal. But we performed brilliantly for such a young team and with such a great coach and we were able to pay back his trust and determination and his hard work,” he added.

“A lot of people enjoyed this and we did everything with all of our hearts.”

Ezatolahi thought he had levelled the scores when he swept the ball home after the Spanish defense failed to clear Rezaeian’s free-kick, only for referee Andres Cunha to rule the goal out after consultation with VAR officials.

“I thought it was a goal and for that fraction of a second I was thinking about all the hard work that I had done and, because in the first game I was suspended, I was under a lot of pressure,” the 21-year-old said.

“God helped me to play well but unfortunately we couldn’t score, the goal didn’t count. Now we are a little bit sad but we will continue to work hard for the next game to make our fans happy.”