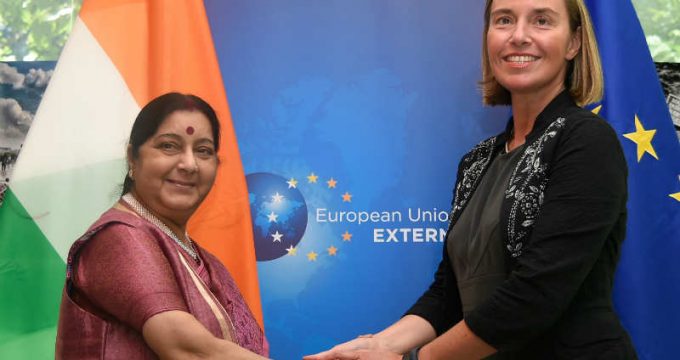 “Federica Mogherini and Minister Swaraj discussed in depth foreign policy and security cooperation, namely on counterterrorism, cybercrime, maritime security, as well as in the Indian Ocean,” according to European External Action Service (EEAS).

“They also addressed developments in their respective neighborhoods, such as the situation of the Rohingya, Afghanistan, the Maldives, the importance of preserving the JCPOA [Joint Comprehensive Plan of Action] with Iran, as well as the ongoing diplomatic work for the denuclearization of the Korean Peninsula.”

On May 8, US President Donald Trump withdrew his country from the JCPOA under pretext of Iran’s non-commitment to the deal and its alleged support for terrorism. He also vowed to reinstate sanctions on Iran.

Russia, China and other members of the G5+1 while criticizing the US exit announced they would remain in the deal. Iran has set a deadline for Europe to find suitable ways to save the deal.

Iranian Deputy Foreign Minister for political affairs Abbas Araqchi said on Friday that the question of Iran staying in the JCPOA depends on the measures to be taken by European countries, Russia and China.

‘We are waiting to see whether the remaining parties to the deal including the European states, Russia and China will be able to make up for US exit from the deal and ensure Iran’s benefits from the JCPOA,’ he added.