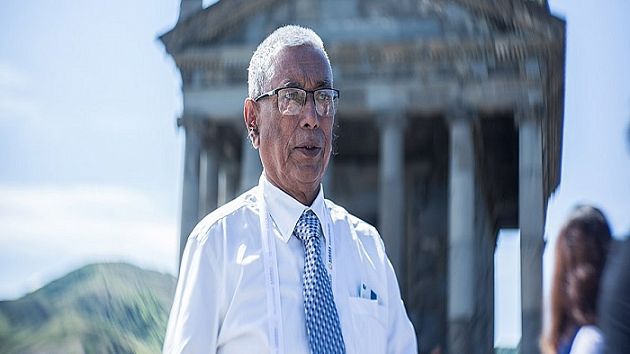 This year’s $1.1m Aurora Prize for Awakening Humanity has been awarded to a Rohingya Lawyer. Kyaw Hla Aung was selected as the 2018 Aurora Prize Laureate among 750 nominations submitted from 115 countries. The lawyer, who has fought against discrimination and repression against the minority Rohingya people in Myanmar, was chosen as the award winner by the Selection Committee from among three finalists.

During a ceremony held from June 8 to 10 in Armenian capital city of Yerevan, Kyaw Hla Aung expressed amazement at how the Selection Committee has found about him and his work, even though he has been engaged as an activist advocating the rights of Rohingya Muslims for decades. “They want to call us Bangladeshis while we are in Myanmar and want to remain Burmese. We are under serious discrimination just because we are Muslims. I spent 12 years in prison. I had no job or food but I believe we will gain back our rights one day,” Kyaw Hla Aung told a press conference after the award ceremony, according to Iranian Diplomacy’s correspondent in Yerevan.

Kyaw Hla Aung has worked for social equality, education, and human rights of the minority Rohingya Muslims for decades. As Co-Founder of the Aurora Prize and the president of Carnegie Corporation of New York, Vartan Gregorian, explains, “We are not dealing with a government but a group who denies them their citizenship”.

“They want no separation from the government but to be part of it. No practical steps have been taken to protect the rights of Rohingya people. Our efforts are to reflect the reality of the issue, not to find a solution,” added Gregorian.

It has been three years the Aurora Prize is being awarded to humanitarian and social activists commemorating survivors and supporters of those killed in the Armenian Genocide of the early 20th century. “It is with a great sense of responsibility that we stand ready to support Kyaw Hla Aung’s advocacy work that will hopefully lead one day to the enactment of national and international policies to protect and defend the vulnerable. Kyaw Hla Aung is doing tremendous work, at great risk to himself, and exemplifies the far-reaching impact one person can have to galvanize a movement, and to help individuals transform their lives,” Gregorian told a presser held in Yerevan’s Hilton Hotel.

Kyaw Hla Aung also spoke of severe restrictions on his people, who have lost their courage and faith in themselves and have become illiterate. He expressed hope that the support of the Aurora Prize serves as important recognition for all of the Muslim victims of human rights violations, as the plight of the Rohingya people continues to become more visible to the international public.

“Kyaw Hla Aung’s work personifies the spirit of the Aurora Prize. He demonstrates the exceptional impact an individual can have in fighting injustice that often seems unbeatable, and inspires us to consider how a brave step forward to support the world’s most vulnerable people can create impact beyond measure,” said Mary Robinson, Aurora Prize Selection Committee Member and Former UN High Commissioner for Human Rights.

Kyaw Hla Aung was congratulated by Dr. Tom Catena, who was awarded the 2017 Aurora Prize for his exceptional commitment to providing urgent medical care to the 750,000 people in the war-torn Nuba Mountains of Sudan. He said: “The Aurora Prize has created a true light for our people in Nuba, and has helped rebuild the resilience of our community, ultimately to keep people alive. I am proud to share the Aurora Prize mantle with such a selfless humanitarian as Kyaw Hla Aung. I congratulate him on receiving this award and applaud his incredibly selfless efforts fighting for such a noble cause.”

The award had two other finalists, including Sunitha Krishnan, women’s rights activist, gang rape survivor, and Co-Founder of Prajwala, who has worked for 27 years to raise awareness about sexual harassment against women and girls.

“I was raped at age 15 and it changed my life. Everyone blamed me for a crime I had not committed. But I did not want to remain a victim, I wanted to be a source of inspiration. People saying I was a victim of rape is a shame for my children but I have worked for 27 years to change the attitude and judgment about child rape. By opening the doors of education for children, I prevent them from becoming rape victims. We see 3.5-year-old girls being sold, who we should save. Although it is important to save the victims, it is more important to take care of them. This is my mission. It is the voice of all rape victims. We are the ones who choose. Half of my foundation’s members are victims and half are the survivors. We want to break the government’s silence about it. I ran a sham campaign in February 2015 to make citizens sensitive about rape. My mission is to put an end to rape,” she explained in a gathering of Aurora guests.

The other finalist was the Mexican Héctor Tomás González Castillo has provided safe shelters and legal assistance to Central American immigrants. “People who leave their countries for the US out of frustration undergo different kinds of difficulty. In some parts of the country, drug smugglers take people hostage and kill them if they cannot pay the money. We provide food, shelter, and medical assistance to refugees who depart for their destination on bare, wounded feet,” Castillo told a presser in Yerevan. n 2011, he founded La 72 Home and Refuge to provide a safe shelter and warm meals to 70 to 80 migrants every day. Fr. Castillo greets all with open arms – even those who might be turned away by other religious institutions. “We always receive them and try to do something to alleviate their suffering.”

The Aurora Prize Co-Founders, Vartan Gregorian, Noubar Afeyan and Ruben Vardanyan, and the organization’s esteemed Selection Committee members joined in congratulating the exceptional efforts of Kyaw Hla Aung, and the 2018 Aurora Humanitarians. A summon for submitting nominations from individuals who have embraced high risks and exemplary courage to save human lives was also issued for the next years’ $1.1m award. The scholarship program runs between 2015 and 2023 (in remembrance of the eight years of the Armenian Genocide 1915-1923) for those who risk their own lives to save others’.

Aurora Prize, Kyaw Hla Aung, Myanmar crisis, Rohingya Muslims June 22, 2018
This is not the Iran regime strategy you’re looking for
Iran may yet save an OPEC output deal