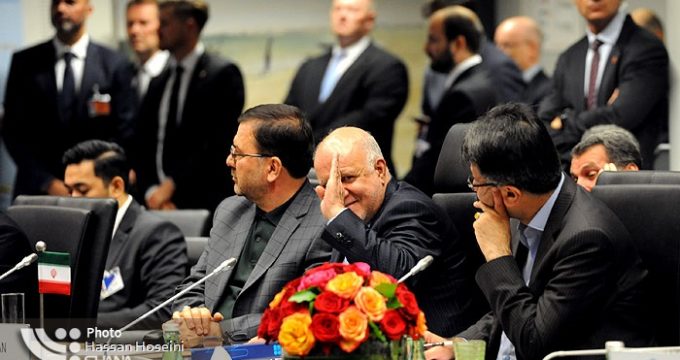 The session which opened after an hour-long delay will be one of the most challenging meetings of the oil cartel in recent years due to US President’s statements and request from some OPEC member states to increase output.

Before the start of the session, Zangeneh and Saudi Arabian Minister of Energy, Industry and Mineral Resources Khalid al-Falih discussed the latest developments in OPEC and international oil markets.

Saudi Arabia and Russia are supposed to propose a boost in oil output in response to the US demand in order to compensate a drop in Iranian and Venezuelan oil exports as a result of US sanctions. Both countries intend to propose an increase of 500,000 to 1.5 million bpd as of July 1. However, Iran, Venezuela and Iraq are opposed to the proposal and Tehran has vowed to veto it with support from Baghdad and Caracas.

Zangeneh, who is in Vienna since Wednesday has announced in different interviews that OPEC was not an American organization and that oil should not be used as a weapon or political leverage against other countries.

He added that the US efforts to put pressure on Iran has been the most important factor behind oil price hikes in recent weeks, adding that Washington will soon get to realize the inefficiency of its policies.

In its November 30, 2016 meeting, OPEC member states decided to raise their oil output ceiling to 32.5 million bpd. Their decision went into force in January 2017 and was later renewed in their later meetings.