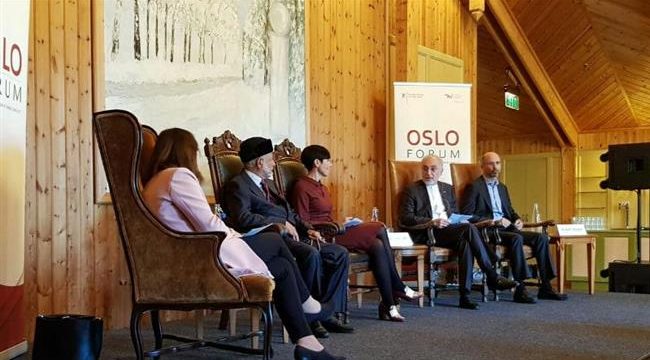 Press TV- Iran’s nuclear chief says the Middle East and the entire world will face a “dreadful” future if a 2015 multilateral nuclear agreement Tehran signed with the P5+1 group of countries falls apart.

Head of the Atomic Energy Organization of Iran (AEOI) Ali Akbar Salehi made the remarks on Friday in an address to an expert panel held on the sidelines of the Oslo Forum in the presence of Norwegian and Omani foreign ministers.

He said the international community showed a severe reaction to the United States’ “unwise and baseless” decisions, including its move to withdraw from the nuclear agreement, officially known as the Joint Comprehensive Plan of Action (JCPOA).

“If the European Union and other countries supporting the JCPOA do not demonstrate their practical opposition to the US policies in due time, they will face a dreadful future and unprecedented insecurity in the region and the world because of the JCPOA’s collapse,” AEOI chief said.

US President Donald Trump announced on May 8 that Washington was walking away from the nuclear agreement, which was reached between Iran and the five permanent members of the UN Security Council – the United States, Britain, France, Russia and China – plus Germany.

In a phone call with his French counterpart, Emmanuel Macron, on June 12, Iranian President Hassan Rouhani said the Islamic Republic will quit the multilateral nuclear agreement if it does not benefit from the deal after the US pullout.

“If Iran cannot enjoy the agreement’s benefits, it will be practically impossible to stay in it,” Rouhani said.

Elsewhere in his address, Salehi stressed the importance of holding dialogue among key regional players and once again reaffirmed the Islamic Republic’s readiness to help solve crises based on diplomatic approaches.

The Norwegian Foreign Ministry said on Wednesday that Oslo supports efforts by the European Union to safeguard the Iran nuclear deal, amid the bloc’s promises that it will protect it following the US withdrawal from it.

Oslo backs efforts by the EU to maintain the JCPOA, the Norwegian Foreign Ministry said after a meeting between Salehi and the Norwegian foreign minister, Ine Eriksen Søreide, in Oslo.