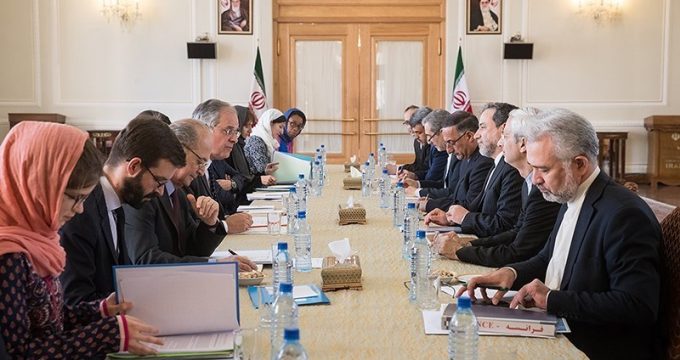 Iran, France hold fresh round of political talks in Tehran

IFP- The fifth round of political talks between Iran and France was held in Tehran on Wednesday.

The Wednesday meeting was jointly presided over by Iran’s Deputy Foreign Minister for Political Affairs Abbas Araqchi and the Secretary-General of the Ministry of Europe and Foreign Affairs of France, Maurice Gourdault-Montagne.

During the talks, the participants underlined the need for preserving the Iran nuclear deal after the US’ unilateral withdrawal from the multi-national treaty and called on all parties to the deal to remain committed to their pledges.

The Iranian and French delegations also called for reinforcement of mutual relations between Tehran and Paris.

The two sides then exchanged views on regional and international developments and explored the ways to leave behind the current disputes and crises.

They also called for speeding up the process of resolving the ongoing crises, including the war on Yemen, through political ways.

Fight against the Takfiri terrorist groups was also among the issues discussed in this meeting.

During the talks, Araqchi expressed Tehran’s outrage at and protest against the continued presence and operation of members of the anti-Iran terrorist group Mujahedin-e Khalq Organization (MKO) in France. He also urged Paris to prevent the terrorist group from taking measures against Iran inside France.

For his part, the French official stressed that Paris is vigilant and closely watches the activities of all groups with records of terrorism in the country.

These negotiations, which are regularly held in Tehran and Paris every six months, are viewed as a mechanism within which the two countries can develop their bilateral relations in various political, economic and cultural spheres.