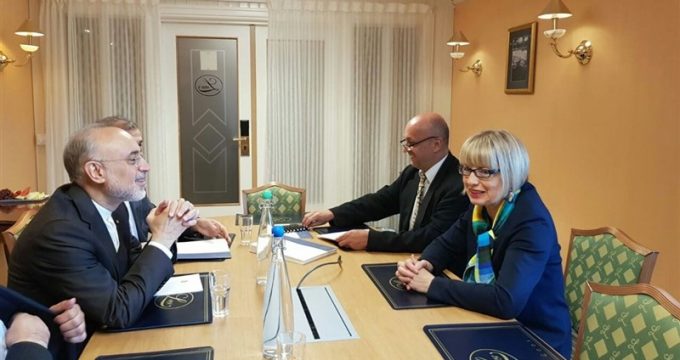 Tasnim – Under a new initiative for cooperation between Iran and small and medium-sized companies from the EU, 100 European industrial enterprises are going to hold business talks with Iranians, a top EU foreign policy official announced.

In a meeting with Head of the Atomic Energy Organization of Iran Ali Akbar Salehi, held in Norway on Wednesday, Secretary General of European External Action Service (EEAS) Helga Schmid assured Iran of the efforts to save the 2015 nuclear deal and secure Tehran’s economic benefits under the agreement.

She also pointed to a new initiative for trade negotiations between small and medium-sized companies from Iran and the EU, saying 100 firms will soon launch business talks with Iran.

Since more than 60 percent of European industries are categorized at that level, the upcoming trade negotiations are expected to provide a proper framework for direct cooperation between Iran and the EU, Schmid added.

Salehi, for his part, called for genuine and practical measures from the European parties to the Joint Comprehensive Plan of Action (JCPOA) for saving the deal.

Reiterating the need for the removal of sanctions on Iran under the JCPOA, he said it is impossible to honor the nuclear deal commitments while sanctions are still in place.

In his trip to Oslo, the Iranian nuclear chief has held meetings with top officials from Norway, the EU and the UN.

On Tuesday, Salehi met with the United Nations Secretary General Antonio Guterres for talks on preventing a collapse of the Iran nuclear deal.