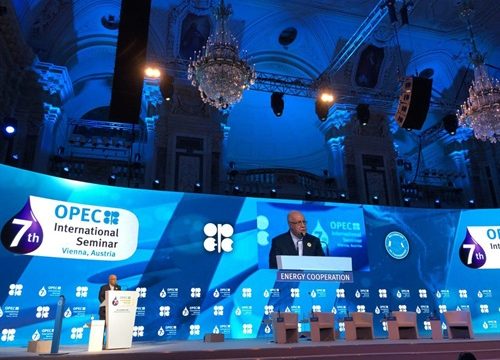 SHANA– Iranian Minister of Petroleum Bijan Zangeneh addressed the 7th International Seminar of the Organization of the Petroleum Exporting Countries (OPEC) in Vienna on Wednesday.

The two-day biennial seminar wraps up on Thursday.

During the address, Mr. Zangeneh said the Seminar deals with the latest challenges the oil market is facing.

He said Iran, as one of the founding members of the Organization of the Petroleum Exporting Countries (OPEC) and throughout its history, has always believed in and committed itself to securing the interests of both the consuming and producing nations, as well as promoting oil market stability.

He continued: “Oil market stability requires cooperation among all oil market stakeholders, including the producers and consumers alike.”

“It is important that I draw attention to the critical role of the constructive cooperation among OPEC and non-OPEC producers within the framework of the “Declaration of Cooperation”. It brought stability in the oil market and promoted world economic growth.”

“In my view, the price of oil is right where a delicate balance is made between three fundamental elements:

· Ensuring timely and sufficient supply of oil to meet demands,

“It is in that context that I have voiced publicly and on several occasions, that Iran is against high oil prices. My objection to high oil prices stems from a deeply held belief that high oil prices benefits neither the producers, nor the consumers in the medium and long term.

“The current price hike is mainly due to some political tensions injected into the oil market. The role of some manipulations in the supply and demand statistics in this equation is insignificant.

“In recent days, the US President has blamed OPEC for the price hike. During its lifetime, especially over the recent years, OPEC has defended reasonable prices for oil and has never either sought or supported unreasonably high prices.

“Indeed, the real responsibility for the current oil price hike lies with the US President himself.

“You cannot have your cake and eat it too. You cannot impose unilateral trade sanctions against two founding members of OPEC – two major oil producers and apply them extra-territorially, and at the same time expect the global oil market not to show adverse reaction!

“The reason behind the current high oil prices is not mainly lack of balance between supply and demand. On the contrary, the political tension created by US Administration has given rise to market instability and uncertainty, worrying consumers and causing price hike.

“Since President Trump’s speech on 8 May 2018, announcing US withdrawal from the JCPOA, the oil price went up around (6) Dollars per barrel.

“Therefore, since the primary reason for the oil price increase is political, then the remedy to reduce the oil prices cannot but be political as well. As a matter of principle, we are against using oil as a political tool and applying restrictions on producers due to political reasons.

We do believe that all oil market players need to admit that market fundamentals should dominate the market and play a determining role in it.

“The United States cannot expect OPEC to act against two of its founding members. On the contrary, OPEC is an independent, mature and responsible organization, expected to strengthen its unity and authority in accordance with its Statute, support de-politicizing the market, and condemn such unilateral actions that disturb the natural trend of oil market.

“Another example is the so called NOPEC legislation targeting the sovereignty of all OPEC members, yet US administration expecting OPEC members to remain indifferent.

“Oil market analysts ask an important question: How should a measure by OPEC to replace the production of its members whose production has declined due to imposition of unilateral and illegal sanctions be interpreted? It would be hard to think of anything but giving a carte blanche to US to continue such illegal sanctions, pressuring OPEC and use oil as a political tool in international relations?”

“Such unilateral actions clearly means threatening companies and banks active in the market, and putting pressure on them.

“In conclusion, while expressing my appreciation to the organizers of this very important seminar for its excellent arrangements, I would like to reiterate that, in our view de-politicizing the oil market is vital for market stability and its stakeholders. Moreover, I believe, as demonstrated in “Declaration of Cooperation”, OPEC has set an excellent example in demonstrating the power of a win-win cooperation that benefitted the producers, consumers, and promoted market stability, energy security and world economic growth.”