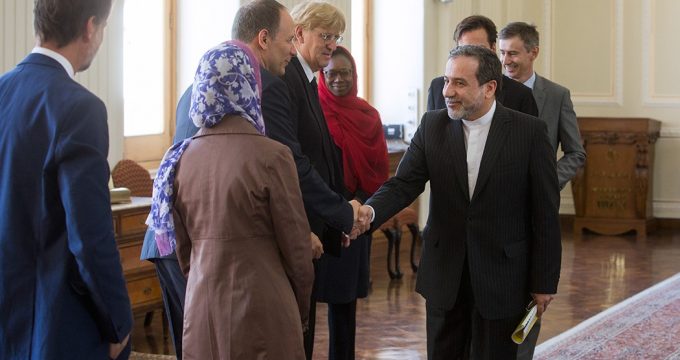 Switzerland after expansion of ties with Iran amid US sanctions threat

June 20, The Iran Project – On the eve of President Rouhani’s upcoming visit to Switzerland, Bern expressed willingness to continue nuclear cooperation with Tehran and extend political consultations between the two countries.

On Monday (June 18), Iran and Switzerland held the 2018 edition (third round) of the talks in Tehran following holding two rounds of political consultations in Bern in June 2016 and 2017.

The 2018 talks were held with the attendance of Iranian Deputy Foreign Minister for Political Affairs Seyyed Abbas Araqchi and Swiss Secretary of State for Foreign Affairs Pascale Baeriswyl.

Meanwhile in an interview with ISNA published on the same day, Swiss Ambassador to Iran Markus Leitner said his country will continue its nuclear cooperation with the Islamic Republic as part of efforts underway to preserve investments made by Europe in Iran.

The ambassador referred to his country’s stance towards the US’ new sanctions on the Islamic Republic and noted Switzerland keeps supporting the Iran nuclear deal and does its utmost to make it successful.

“We know that as the International Atomic Energy Agency (IAEA) has reiterated in its reports Iran has remained completely faithful to its pledges under the JCPOA. That’s why we regret the US decision to pull out of the deal and hope that the accord would be fully implemented,” said Leitner.

He then referred to the European sides’ efforts to preserve the JCPOA and said huge efforts are underway to preserve the current investments made in Iran and “we hope the results could come to fruition in the next few weeks.”

Also, Swiss Foreign Ministry in a statement on Monday (June 18) described Tehran as Bern’s major political and economic partner, saying that mutual relations have been deeper in recent years, as the two sides are eager to continue the positive path in future.

The statement released on the event of President Hassan Rouhani’s upcoming visit to Switzerland, said that he is slated to visit the country on July 2-3 at the invitation of Swiss Federal Council.

residents of the two countries are to discuss the latest developments on Iran nuclear deal known as the JCPOA during the trip with the aim of finding ways to maintain the deal and its achievements and ensure non-proliferation in the Middle East despite US exit from the landmark deal.

Under the MoU, Matisa will cooperate on overhaul and retrofitting of ballast cleaners, tampers and regulators as well as sourcing of 21 track machines with Iran’s RAI railway company, the report said.

“Switzerland has been a neutral country for hundreds of years, and has always maintained its neutrality on political issues,” Matisa CEO Franz Messerli stated during the signing of the agreement in Tehran.

Iran nuclear deal, Iran-Switzerland ties, JCPOA, US withdrawal from JCPOA June 20, 2018
Europe not serious enough against US’ Iran policy
No need to join Int’l treaties that are against national interests: Iran Leader