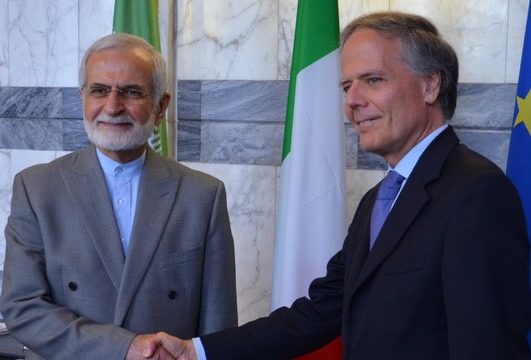 Italy says JCPOA should be protected

Enzo Moavero Milanesi, in a meeting with the visiting chairman of Iran’s Strategic Council on Foreign Relations Kamal Kharrazi in Rome on Tuesday evening, said the European Union’s (EU) stance is to completely support the JCPOA.

As Milanesi said, the Iran Deal is an important agreement for nonproliferation of nuclear weapons, and it is also a success for preserving regional security and serving the interests of the international community.

After the meeting, Iran’s Kharrazi told the Islamic Republic News Agency (IRNA) that the two sides held talks on bilateral issues and the question of the JCPOA as well.

‘The European countries are making efforts to protect the Iran Deal after US May 8 unilateral withdrawal from the deal,’ Kharrazi said.

However, Iran has called for firm and reliable guarantees for preserving the 2015 nuclear deal and believes that the political stance is not enough, Kharrazi noted, adding Italy, as Iran’s first trade partner in Europe, endeavors to achieve this end.

He further hoped that Italy and other European countries would work on a practical mechanism in this regard.

Kharrazi went on to say that the Europeans well understand that not only economic interests but also security ones are behind preservation of the Iran nuclear deal, because if the JCPOA is broken, bad events will happen in the region which will also affect the regional neighbors who are the Europeans.

He further said the world has changed and any peace, security and development in the region will be impossible without Iran’s cooperation.

‘Key players in the region should get ready to come to talks in order to adopt right stance on the regional developments,’ Kharrazi said, adding Italy can play an important role in this relation.

The senior Iranian official expressed hope that the new Italian government and Iran would widen relations more than before.

Kharrazi, who is now in the Italian capital city, is to meet with the officials of Vatican on Wednesday.

Later, he will leave for Spain to hold talks with Spanish officials on the issues of mutual interests.