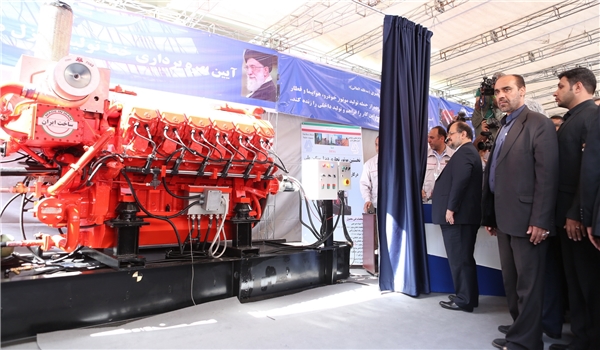 The new national diesel engine comes in two types of hybrid and gasoline-consumption types and its production line was inaugurated in the presence of the defense, road and industry ministers as well as the vice-president for scientific affairs.

“The diesel engine is one of the technologies and industries that enemies were attempting through sanctions not to allow the Islamic Republic of Iran to acquire,” Defense Minister Brigadier General Amir Hatami said.

He added that the diesel engine has different applications, including in railway, road, marine, oil, power and defense industries, noting that the defense ministry will use it in the navy and production of armored equipment.

The Iranian experts have made huge progress in building various types of diesel engines.

He expressed the hope that exports of Iran-made diesel engines would be expanded in the near future.

Stressing that close to 50% of cars in Europe have diesel engines, Nematzadeh called for the entry of industrialists into manufacturing diesel engine vehicles.

Increasing the fuel economy by 30 percent, decreasing emissions by 40 percent, higher durability of the parts and lower maintenance costs are the advantages of this engine over similar gas-fueled ones.

Due to its common parts with EF7 engine and its compatibility with euro V emission standards, IKCO diesel engine would be eco-friendly and economical.

IKCO EFD performance is so high that makes is competitive in European markets. The engine meets euro V emission standards and could be mounted on C and D segment sedans manufactured for Iran market.

Iran’s first national diesel engine for passenger cars was unveiled at Iran Khodro Powertrain Co. (IPCO) on November 17, 2009. This 90Kw diesel engine is considered as one of the most powerful ones in its kind worldwide.