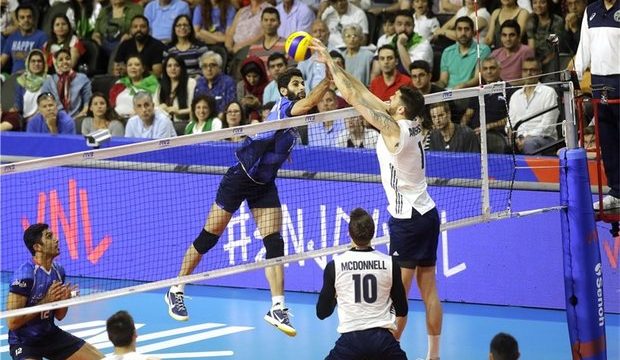 US beats Iran in 3 sets at FIVB Volleyball Nations League

Press TV – In a crowded stadium where Iranians were loud and jubilant, team US hosts managed to defeat their guests from Iran in three consecutive sets.

In a close first set the US defeated Iran 29-27 to take the early lead. In the second set, the US squad gained a 25-20 victory over Iran and the third set was once again tight, ending in a 26-24 victory for the US team.

GREAT SAVE! Iran’s Milad Ebadipour with the stretch kick to keep the ball alive! But USA’s Dan McDonnell makes quick work of the point after that! #VNL #BePartOfTheGame #volleyball @IRIVF @usavolleyball pic.twitter.com/c5GtRqR9aU

Iran, Poland and Serbia joined the US Men’s National Team for three days of FIVB Volleyball Nations League matches on June 15-17, 2018 at the Sears Centre Arena in Hoffman Estates, Ill.

The US men’s team ranks number 2 in the world, Poland number 3, Iran number 8 and Serbia eleventh in the world.

The 2018 FIVB Volleyball Men’s Nations League kicked off on May 25, and will run through July 8 in 22 host cities.

A total of 16 teams compete in a round-robin format with every core team hosting a pool at least once.

The teams are divided into four pools of four teams at each week and compete five weeks long, with a total of 120 matches.

The top five teams after the preliminary round join the host of the final round to compete in the last level.

The relegation takes in consideration only the 4 challenger teams.

The last-ranked challenger team plays the promotion play-off against the Challenger Cup winners. The winners of the play-off will qualify for the next edition as a challenger team.