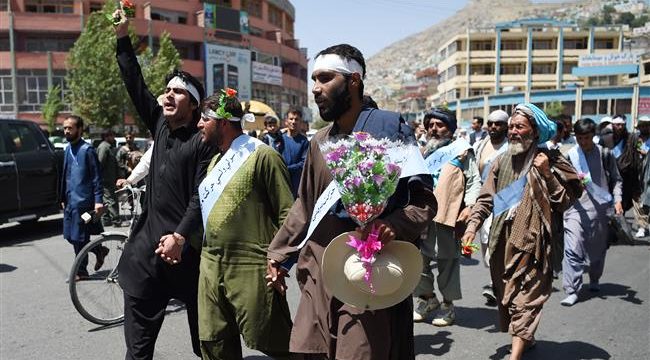 Press TV- After walking hundreds of kilometers across Afghanistan, dozens of peace marchers have arrived in the capital, Kabul, just as the Taliban militant group ends a ceasefire agreement and resumes its attacks.

Exhausted after their 700-kilometer trek, the marchers walked double file through Kabul on Monday, chanting, “We want peace!” and “Stop fighting!”

“We want our people to stay united for peace and get rid of this misery for the next generation,” said Mohammad Naikzad, one of the marchers. “I am calling on both sides — the government and the Taliban — for God’s sake… find a way for peace and reconciliation.”

The march, believed to be the first of its kind in Afghanistan, started as a sit-in protest and hunger strike in Lashkar Gah, the capital of the southern province of Helmand which is a Taliban stronghold.

On June 9, Taliban announced in a statement that it had agreed to the truce deal proposed by the Afghan government.

The peace marchers’ arrival came a day after the Taliban, who before the foreign invasion of Afghanistan controlled most of the country, announced on Sunday they would not extend their temporary ceasefire with Afghan security forces.

However, the government on Saturday extended its own ceasefire with the Taliban for another 10 days.

The Taliban has said they would resume their attacks, targeting foreign and Afghan armed forces.

The militants “are ordered to continue their operations against the foreign invaders and their domestic stooges as usual,” the group said in a statement.

After announcing their refusal to extend the truce, Taliban members attacked security forces in numerous districts of eastern and southern Afghanistan, officials told AFP, but there were no details on casualties.

Taliban’s five-year rule over most of Afghanistan came to an end when the US and its allies invaded the country on October 7, 2001 as part of Washington’s so-called war on terror.

Despite the presence of foreign troops across the country since then, not only has violence continued, but also, the Daesh terror group has entered the chaotic scene in Afghanistan.