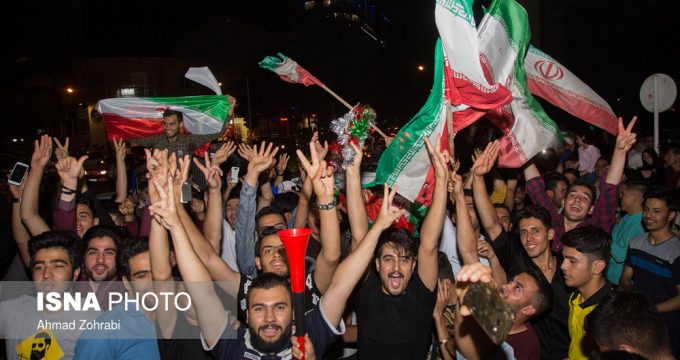 Iran’s World Cup fever bursts out into the streets

Bourse and Bazaar | AFP- Iranians had few options to watch their World Cup opener against Morocco, bar a few cinemas and cafes, but after their shock victory Friday, they burst out into the streets of Tehran in rare and wild celebration.

The mood had been dampened earlier in the day when the authorities announced that planned open-air screenings in parks and Tehran’s largest stadium had been banned without explanation.

Many had been excited about watching the match at Azadi (meaning “freedom”) stadium because it would have been the first time since the Islamic revolution that men and women could attend a sports event there together.

Instead, with no bars and mixed signals from police about whether cafes could screen the games, many of the city’s football-mad population turned to cinemas to vent their passion.

Supporters thronged the steps of one multiplex in central Tehran ahead of the match, chanting and deafening passers-by with blasts of vuvuzela.

There was a notably even split between men and women. Football is particularly popular among Iranian women, in part because they are banned from attending live matches, lending it an illicit air.

“We hoped to go to the stadium but we are very happy to come here with my family. I’m not that optimistic (that we can win) but I’m just happy to be in the World Cup—that’s enough,” said Rahelleh, 32, with her young daughter in her arms and an Iran hat on her head.

But she was wrong.

An own goal by Morocco’s Aziz Bouhaddouz in the 94th minute handed Iran their first World Cup victory in 20 years.

Within minutes, Tehranis had poured out on to the streets as if they had won the entire tournament.

Traffic on the city’s main north-south artery, Vali Asr Street, reduced to a crawl as hundreds of cars blasted their horns and jubilant fans hung out of windows waving the Iranian flag and screaming.

“We have not had many things to celebrate recently, so this feels really great,” said Amin, 30, as he watched an impromptu crowd of hundreds dancing and cheering in the middle of the street.

By midnight, pounding music and fireworks could be heard across the city and the whooping showed no sign of letting up.

Police appeared happy to let it continue despite such public displays of jollity—particularly men and women together—normally prohibited in the Islamic republic.

The victory was all the sweeter given the rough journey the players have faced, with Portuguese coach Carlos Quieroz complaining about limited resources and poor facilities for the squad.

The players were also the latest victim of US sanctions, with Nike refusing to provide the team with football boots, saying it would breach the US trade embargo on Iran.

That quickly gave rise to a popular meme on social media after the victory with the Nike logo and an altered slogan reading: “We just did it. Without you.”

The team faces a tall order in recreating Friday’s jubilation as they go on to face two of the world’s best teams in Spain and Portugal.

But Iranians always revel in being the underdog.

In a profile for GQ magazine this week, Quieroz said: “Iran loves football, and people know we have problems and now look at Iran differently, more respectfully because they know the challenges we have.”

Iranians arrive to watch the World Cup Group B soccer match between Morocco and Iran at Azadi cinema in Tehran on June 15, 2018